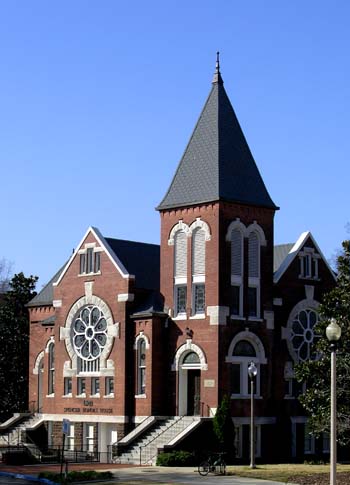 The Spencer Honors House is the home of the UAB Honors Program located at 1190 10th Avenue South as part of the UAB campus.

The 9,231-square foot building was built in 1901 for 2nd Presbyterian Church. That congregation left in December 1963. In January 1964 New Hope Baptist Church moved into the building from its former location near Sloss Furnaces. As the Medical Center continued to claim land, New Hope moved again. UAB took possession of the property in 1970 and reopened it as the UAB Ballet House, with space for the university's ballet programs as well as the Alabama Ballet, in September of that year.

The building was later converted into a temporary student union with offices for the Student Government Association and Student Organizations and Activities during construction of the UAB University Center.

Afterward, it was converted again into a faculty lounge and eventually came to serve as a center for UAB's honors program and its art history department. Honors students participated in repair and renovation work prior to a major overhaul beginning in 2001. The renovation included dividing the former church sanctuary into a large lecture hall, a seminar room, and several smaller study rooms. The facility was rededicated on March 18, 2002 and named in honor of William and Virginia Spencer, who had donated $2 million towards the renovation costs.

Vaughn Randall's 2006 sculpture "Rosette Bobbin" is patterned after the round stained glass windows of Spencer Honors House and is displayed outside it. In the fall of 2019 the stained-glass windows were removed and restored during a months-long process.