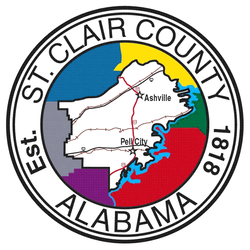 St Clair County is a county in the Birmingham-Hoover Metropolitan Statistical Area located east of Jefferson County and Birmingham. It was named in honor of General Arthur St Clair, who came to America from Scotland as an officer in the British Army in the French and Indian War. He settled in America and served as a general in the Continental Army during the American Revolution.

The census estimated 85,237 residents in 2012, a 32% increase from the 2000 population count of 64,742. It has two county seats, one in Ashville and another in Pell City. While other counties in Alabama have multiple courthouses, St Clair County is the only county in Alabama with more than one county seat.

St Clair County was created by the Alabama Territorial General Assembly on November 20, 1818 and named for Revolutionary War general and Indian fighter Arthur St Clair. The county seat was incorporated and named "Ashville" in honor of John Ash. In 1836, a portion of St Clair County was separated to establish Cherokee and DeKalb Counties. In 1866, after the Civil War, a northeast section of the county was used to create Etowah County. The Southern Judicial District was established, with Pell City as its seat, in 1907. 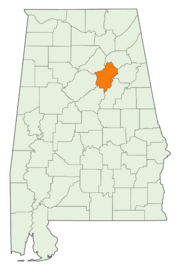 According to the U.S. Census Bureau, the county has a total area of 654 square miles, 3% of which is covered by water.

As of the census of 2000, there were 64,742 people, 24,143 households, and 18,445 families residing in the county. The population density was 102 people per square mile. There were 27,303 housing units at an average density of 43 per square mile. The racial makeup of the county was 90% White and 8% Black or African American. 1% of the population were Hispanic or Latino of any race.

There were 24,143 households out of which 35.1% had children under the age of 18 living with them, 62.8% were married couples living together, 10.0% had a female householder with no husband present, and 23.6% were non-families. 20.8% of all households were made up of individuals and 8.2% had someone living alone who was 65 years of age or older. The average household size was 2.60 and the average family size was 3.01.