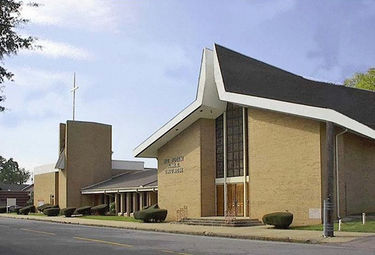 It was organized on November 10, 1873 by A. L. Mitchell and David Johnson, meeting in a storefront on the corner of 25th Street and 2nd Avenue North. In 1876 the congregation completed construction of a new building a block north, at the corner of 25th and 3rd Avenue North. A formal incorporation of the church was recorded on September 22, 1886, with Jessie Claxton, W. S. Robinson, G. Eli, Sandy Goodlow, Jackson Wiley, W. C. Black, Frank Hade, Monroe Steavens, and Dave McSpaden as members of its board of trustees. The church briefly sponsored a public school for African American children in their building.

In the 1920s the church moved again, to a basement at 7th Avenue and 15th Street North. Reverend H. N. Newsome led the congregation in working to construct a new building, which was delayed by the Great Depression and completed in 1942. Its mortgage was paid off in 1957. A year later St John chartered its own credit union with S. C. O'Neal as president. During the Civil Rights Movement St John AME Church was one of the "movement churches" used by the Alabama Christian Movement for Human Rights. The funeral for Carole Robertson, one of the four girls who were killed in the bombing of nearby 16th Street Baptist Church was held at St John AME Church on September 17, 1963.

In 1971 ground was broken for a new building on the same site, though construction only began in earnest in 1973. Services were moved to the 4th Avenue YMCA and Ephesus Seventh Day Adventist Church. The new building was dedicated on May 26, 1974. Two years later Reverent Thomas was elected Bishop of the African Methodist Episcopal Church. The debt on the new sanctuary and parsonage was paid off in 1992. Through the rest of that decade the church expanded its outreach programs to low-income and homeless neighbors.