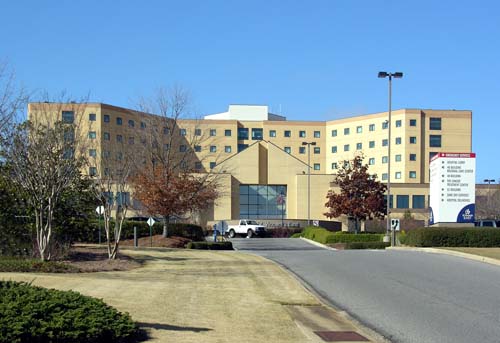 Ascension St Vincent's East is a 282-bed hospital located at 50 Medical Park Drive East in the Huffman neighborhood of north-eastern Birmingham. Until 2007, the hospital, known as Medical Center East, was the flagship facility of Eastern Health System. EHS and its three hospitals were integrated into the St Vincent's Health System in July 2007.

In 2003, Medical Center East was the only hospital in Alabama to receive the “Excellence in Healthcare Quality” award for Acute Myocardial Infarction from the Alabama Quality Assurance Foundation.

The hospital has been in Huffman since the 1980s. Prior to the move, it was located in East Lake and was known as East End Memorial Hospital.

In November 2008, St Vincent's East won approval to add an 80-bed psychiatric unit. It originally filed for the beds in June, and was opposed by Hill Crest Hospital, a full-service psychiatric facility nearby in East Lake. After Carraway Methodist Medical Center closed in October, St Vincent's East applied again, and was opposed by Hill Crest and Trinity Medical Center, but was approved the beds on November 7.

In January 2023 construction of an inpatient cardiology unit on the 7th floor of the hospital's north tower was completed. The unit, which is aligned with the Birmingham Heart Clinic, began scheduling patients in the spring of that year.