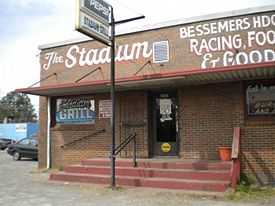 The Stadium Grill is a landmark burger restaurant located at 1002 4th Avenue North near Snitz Snider Stadium in Bessemer. Originally opened in the 1930s, it has been owned by Will and Sandy Bright since the early 1990s.

Well known for its hand-formed hamburgers and hand-cut fries, the Stadium Grill operates on a cash basis only.

On May 5, 2012 an electrical fire caused significant damage to the restaurant.