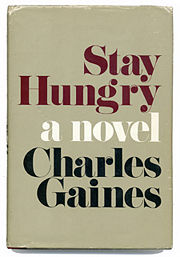 Stay Hungry is a 1972 novel by Charles Gaines which tells the story of Craig Blake, a young Birmingham scion who gets involved in a shady real-estate deal. In order to close the deal, he needs to buy a gym building to complete a multi-parcel lot. When he visits, however, he finds himself drawn to the carefree way of life of the Canadian Indian bodybuilder Joe Santo, as well as to Mary Tate, who works in the gym. Blake struggles to balance his upper-crust social life with his new interests. The story concludes with a dramatic series of events set during a Mr Universe competition at Boutwell Auditorium.

The novel was adapted by Gaines into a feature film, directed by Bob Rafelson and starring Jeff Bridges as Craig, Arnold Schwarzenegger as Santo (an Austrian bodybuilder for the film), and Sally Field as Tate. The film was shot in Birmingham in 1975 and netted Schwarzenegger a Golden Globe for "Best Acting Debut in a Motion Picture".