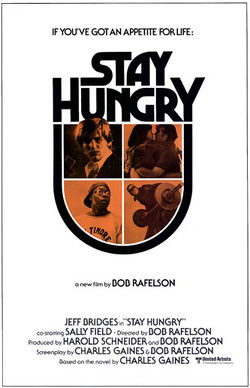 Stay Hungry is a 1976 film directed by Bob Rafelson from a script by Charles Gaines, adapted from his 1972 novel set in the bodybuilding community in Birmingham.

The film was shot on location in Birmingham in 1975 with Jeff Bridges as Craig, Arnold Schwarzenegger as Joe Santo, and Sally Field as the gym receptionist, Mary Tate. Schwarzenegger won a Golden Globe for "Best Acting Debut in a Motion Picture" for his performance in the film.

The film opens with exterior shots all around Birmingham as three separate drivers converge on the Bank for Savings Building, which serves as the setting for the Developer's office. The Blake Manor is actually a house on Mountain Brook Parkway. The Olympic Gym is set on 2nd Avenue North downtown. Craig walks down 20th Street North with Mary Tate after dinner at Joy Young Restaurant. The party scene takes place at the Country Club of Birmingham and the Mr. Universe competition is staged at Boutwell Auditorium. The final mayhem spreads from Boutwell, down 20th and ends, famously, with bodybuilders posed on the fire escape stairs of the Lyric Theatre.

Best known then as "Mr Universe", Schwarzenegger was happy to mingle with the crowds of extras and lookers-on during filming. Speaking with what Birmingham magazine described as a "slight Austrian accent", he said "I love the people of Birmingham. I think they are very warm and affectionate, and they still have enough time to talk to each other. I really like the people here, and the hospitality." It was expected that the crew of Stay Hungry spent in excess of half a million dollars while in the city.