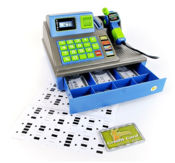 Summit Products was a company that designed and marketed educational toys. It was founded in 1995 by Dan Henderson in his Trussville home. Summit was best known for its "Zillionz" interactive talking toy ATM machines and cash registers.

In 2005 the company opened a 3,000 square foot office on Gadsden Highway in Trussville. Within two years, it reported over $31 million in revenues and employed 24 people. In December 2008 Summit moved to 2160 Highland Avenue, a 20,000 square foot building which had formerly housed the offices of O2 Ideas. In 2012 it's business had tapered back to $10.4 million in revenue with 18 employees.

In January 2009 designer Jeff Parker created a 40-foot-tall talking robot, named "RALF" for the company's lobby. The robot was intended to help entertain children visiting the company's offices and testing facility on tours.

Summit Products closed in 2014 and filed for Chapter 7 bankruptcy liquidation.