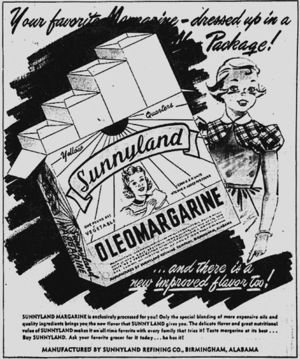 The Sunnyland Refining Company was a manufacturer of Sunnyland brand oleomargarine located at 3330 10th Avenue North in Birmingham. It was founded by James Kidd Sr in 1930, began producing in 1931, and opened a new plant in 1938.

It was acquired by the Kane-Miller Corp. of Tarrytown, New York, which operated Sunnyland as a separate division. In 1983 the company launched its "Superman" brand of peanut butter.

The division was purchased in 1999 by Ventura Foods of Brea, California, a division of Mitsui & Co. (USA), Inc.. The company continues to produce "Smart Balance" brand margarines as well as several private label products at its Birmingham plant and distribution center at 3900 Vanderbilt Road.