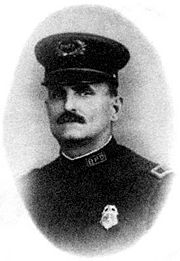 Shirley ran unsuccessfully for Police Chief in the 1910 Birmingham municipal election, losing to George Bodeker. Bodeker's successor, Martin Eagan, promoted him to Chief of Detectives in 1916.

Shirley was appointed to succeed Eagan, a Catholic, a year later by the first official act of incoming Mayor Nathaniel Barrett, whose campaign had been supported by the True Americans and the Ku Klux Klan. Eagan resigned rather than accept his demotion to patrolman.

In June 1920 Shirley's department successfully protected an African American assault suspect, Ephraim Hardy, from a lynch mob by turning fire hoses on the crowd, reported to number more than 5,000 men. Attorney William Alexander was charged with inciting the riot.

After St Paul's Catholic Church pastor James Coyle was murdered by Edwin Stephenson in 1921 Shirley testified to a Grand Jury about the murder investigation, as well as his previous efforts to help Stephenson retrieve his daughter when she had fled the household.

Shirley and eighteen other officers were dismissed from the department by incoming Commissioner of Public Safety William Cloe, during the administration of David McLendon. The group petitioned unsuccessfully to be reinstated. Cloe appointed Fred McDuff as Shirley's successor.

Shirley was elected to the Sheriff's office in 1923 and served one four year term, during which his and McDuff's departments both investigated a series of brutal murders apparently conducted by a so-called axe syndicate. He rose to the rank of "Imperial Klexter" in the national Klan by 1924 and went on to serve as warden of the Kilby Prison in Montgomery.

Shirley also served as treasurer for the Alabama Children and Animal Rescue League. He and his sons founded the T. J. Shirley & Sons Real Estate Company in Birmingham in 1927.