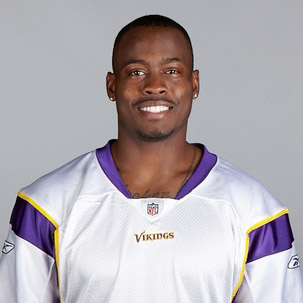 Tarvaris Fox Jackson (born April 21, 1983 in Montgomery; died April 12, 2020 in Montgomery) was an NFL quarterback. He played college football for the Arkansas Razorbacks and Alabama State Bulldogs and was drafted by the Minnesota Vikings in the 2006 NFL Draft and later traded to the Seattle Seahawks.

Jackson was born and raised in Montgomery and graduated from Sidney Lanier High School in 2001. He then enrolled at the University of Arkansas and played three games for the Arkansas Razorbacks football team as a freshman but suffered a season-ending injury. Consequently, Jackson received a medical redshirt for the season. In 2002, Jackson played 8 games. He completed 14 of 39 passes for 143 yards, 1 touchdown, and 2 interceptions.

In 2003, Jackson transferred to Alabama State University and led the Hornets to an 8-5 record, , a Southwestern Athletic Conference Eastern Division title, and a berth in the SWAC Championship Game at Legion Field. He completed 160 of 316 passes for 2,342 yards, 18 touchdowns, and 13 interceptions and rushed 444 yards on 91 carries including 5 touchdowns. As a junior in 2004, Jackson won SWAC Championship MVP in Alabama State's second 10-win season in school history. With 11 starts in 12 games, Jackson completed 182 of 349 passes for 2,556 yards, 20 touchdowns, and 9 interceptions, rushed in 65 carries for 253 yards and 3 touchdowns, and was sacked 10 times for 97 yards lost.

Jackson was selected with the last pick in the 2nd round (64th overall) of the 2006 NFL Draft, though he had been projected for a 4th-7th round pick. He was the 5th quarterback taken and the 1st Division I-AA player selected. He was the first quarterback from Alabama State to be drafted into the NFL since Ricky Jones in 1992. On July 26, 2006, Jackson signed a four year deal with Minnesota, including a $1 million signing bonus.

Vikings coach Brad Childress had been interested in finding a "diamond in the rough" quarterback of the future, a raw talent to whom he and starter Brad Johnson could teach his offensive system. Childress praised Jackson's throwing motion and athleticism. His preseason work placed him at number two on the Vikings' depth chart, alongside newly-signed backup Brooks Bollinger. Mike McMahon and J. T. O'Sullivan were cut from the roster.

Jackson, who had undergone minor knee surgery to repair his meniscus during the preseason, debuted for the Vikings in the 4th quarter of a week 13 match-up against the Chicago Bears. He returned two weeks later against the New York Jets and scored his first touchdown with a pass to running back Mewelde Moore. He finished the game with 177 yards passing, 20 yards rushing, one touchdown and one interception. He was named the starter for the following game at Green Bay, but his offense amassed only 27 yards passing, converted only three first downs, never reached the red zone, and failed to score in a 9-7 defeat in the cold rain. Nevertheless, Jackson kept the starting job for the rest of the season.

In 2007 Jackson went 8-4 as a starter, averaging 159 yards per game with 9 touchdowns and 12 interceptions for an offense paced by star running back Adrian Peterson. Opposing defenses stacked the line against the run, sometimes dropping only two or three defenders into coverage. In the final regular season game against the Denver Broncos, Jackson did lead to fourth-quarter scoring drives to get to overtime, but fumbled on the second play to give Denver the win.

In 2008 the Vikings improved their overall roster, trading for Chiefs defensive end Jared Allen and adding free agents Bernard Berrian and Madieu Williams to a line-up with seven Pro Bowl players. Childress was counting on Jackson's improvement as a passer, and signed Gus Frerotte as his backup. Jackson injured his knee in the preseason, but was on the field for the first game, which closed with a interception. After another loss to Indianapolis in week 2, Childress benched Jackson.

Jackson returned in week 14 when Frerotte was injured. Starting the second half, he completed 8 of 10 passes for 105 yards and a game-winning touchdown against the Detroit Lions. He started against the Arizona Cardinals a week later and went 11-17 for 163 yards with four touchdowns and no interceptions, earning NFC Offensive Player of the Week and FedEx Air Player of the Week honors. In week 16, Jackson went 22-36 for 233 yards with two touchdowns and rushed for another 76 yards in a 24-17 loss to the Atlanta Falcons. The Vikings won the NFC North division with a comeback victory over the New York Giants in week 17. Their season ended, however, with a loss to Philadelphia in the first round.

The Vikings quarterback situation got more complicated leading up to the start of the 2009 season with the signing of Sage Rosenfels and on-again off-again negotiations with retired Packers star Brett Favre. Jackson and Rosenfels were in competition for the starting job when Favre officially signed on August 19. Backing up Favre in the next game, Jackson threw for 202 yards and two touchdowns and was kept on the roster.

Favre and Jackson both returned on one-year contracts in 2010. Jackson got the start on December 12, breaking Favre's 297-game streak of not missing a start. Jackson injured his toe during the game, and was replaced by former UAB Blazers quarterback Joe Webb. Jackson was not offered a contract in 2011 and became an unrestricted free agent.

On July 11, 2011 Jackson signed with the Seattle Seahawks and was reunited with former Vikings offensive coordinator Darrell Bevell. He enjoyed a career year, finishing with 3,091 yards passing, 14 touchdowns and 13 interceptions, but the Seahawks missed the playoffs. During the off-season the team acquired former Green Bay Packer Matt Flynn and drafted Wisconsin quarterback Russell Wilson. They traded Jackson to the Buffalo Bills for a seventh-round pick. Jackson did not see any game action as a third-stringer in Buffalo. The Bills released him in June 2013 after re-signing him to a two-year contract.

Seattle signed Jackson to a one-year contract for the 2013 season and he beat out Brady Quinn for the opportunity to back up Russell Wilson. The Seahawks went on to win Super Bowl XLVIII in East Rutherford, New Jersey. Jackson took the field late in the blow-out victory over the Denver Broncos. He was released as a free agent after the 2015 season. In June 2016 he was arrested and charged with aggravated assault for allegedly threatening his wife with a gun during an argument. He denied the allegation and the charges were later dropped. He returned to Sidney Lanier High School, and later to Alabama State, as an assistant coach. In 2019 he took a job as quarterbacks coach for the Tennessee State Tigers.

Jackson died in a single-vehicle collision near Montgomery on the evening of Easter Sunday, April 12, 2020. He was survived by his wife, Lakitta, and three children.