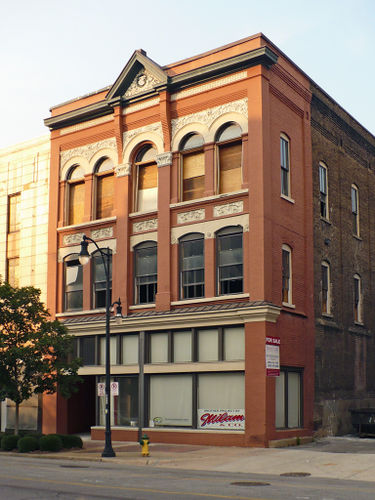 This article is about a building on 19th Street North. For other similarly-named buildings, see Taylor Building (disambiguation).

The Taylor Building is a 12,800 square-foot, three-story office building located on Block 86 at 215 19th Street North, across from the McWane Science Center.

The building was commissioned in 1890 by E. G. Taylor, whose interlocked initials appear in the triangular pediment at the roof. The brick building, featuring arcaded windows, foliate terra cotta panels, small owls, and corbelled brick projections, was constructed by the Gilreath Construction Company.

Taylor built the building for use by doctors and gas and land companies. It was later occupied by milliners, shoe salesmen, and clothers. From the 1950s to 1983, it was occupied by Three Sisters clothing boutique, whose metal sign entirely covered the second floor historic facade. The post-war signage was removed in 1985 by the owner of Gussini Shoes, which moved into the building that year.

Later the upper floors were renovated as loft residences and the building was called Taylor Lofts. The Atlanta-based firm Engineering Design Technologies acquired the building and has performed repairs and exterior renovations to maintain it and update its systems.