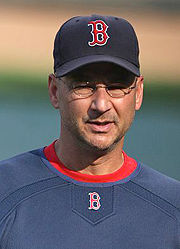 Terry Jon "Tito" Francona (born April 22, 1959, in Aberdeen, South Dakota) was the general manager for the Birmingham Barons from 1993 to 1996. He is currently the manager of the Boston Red Sox in the American League. In 2004, he guided the Red Sox to their first World Series championship since 1918. In 2007, he led them to another World Series title.

Francona grew up outside of Pittsburgh, Pennsylvania and got his start in baseball at New Brighton, Pennsylvania High School, where he excelled under the coaching of Greg "Faz" Fazio. His father was Tito Francona, who played in the majors from 1956 to 1970, and went to a neighboring high school near Pittsburgh.

Francona was drafted out of the University of Arizona in the first round of the 1980 amateur draft by the Montreal Expos, using the 22nd overall selection. At Arizona he had earned the Golden Spikes Award in 1980 as the best player in amateur baseball.

The left-hander rose quickly through the minor leagues, first appearing in a Montreal uniform August 19, 1981, a week after the end of that summer's player strike. Francona appeared mainly as an outfielder that first year, and he went 4-for-12 in the National League Division Series against the Philadelphia Phillies, an extra playoff round utilized that year because the season was conducted in two halves as the result of the strike. The Expos won that series, three games to two.

As the seasons went on, Francona shifted to first base, where he ultimately played a hundred games more than he had in the outfield. He also developed a reputation as a contact hitter, with very few home runs, walks, or strikeouts.

The Expos released Francona after the 1985 season, during which his batting average had slipped to .267 after posting a .346 average in limited action in 1984. He went on to sign one-year contracts with the Chicago Cubs, Cincinnati Reds, Cleveland Indians, and Milwaukee Brewers. The Brewers re-signed Francona for 1990, but he only played in three games for them that year, the last on April 19. In ten seasons and 708 games, he posted a .274 career average, with 16 homers and 143 RBI.

Francona's first managerial job was with the Chicago White Sox' Class-A minor league affiliate, the South Bend White Sox. In 1993, he was promoted to the Double-A affiliate Birmingham Barons and in his first year with the club they won the Southern League pennant, earning him Baseball America's "Manager of the Year" honors. The following year, the team was swamped by press coverage when NBA star Michael Jordan joined the team in an effort to start a baseball career. Baseball America named him the "top managerial prospect" in the minors in 1994.

Francona's major league managerial career began with the Philadelphia Phillies, where in four seasons (1997 through 2000) the club never rose above third place in the National League East division. His best finish with the Phillies was 77-85 in 1999.

The Red Sox hired Francona to manage their club in 2004, after Grady Little's contract was not renewed as a result of the Red Sox loss of the 2003 American League Championship Series.

Francona led the Red Sox to a 98-64 record in 2004, the second-best record in the American League behind the division-rival Yankees. Under Francona's leadership, the club gelled in the second half and was the hottest team in baseball after the All-Star break.

As the American League wild card, the Red Sox dispatched the AL West champion Anaheim Angels, three games to none, in the Division Series. In the 2004 American League Championship Series, the Red Sox fell behind the Yankees, three games to none, including a 19-8 loss in Game 3 at home in Fenway Park. However, under Francona's guidance, the club regained its composure and won the last four games of the series, the first time in Major League Baseball history that a team rallied from an 0-3 deficit to win a playoff series (and only the third team to even make it as far as Game 6). Francona's management of his bullpen staff in the four victories was generally regarded as outstanding. The Red Sox then swept the St. Louis Cardinals, four games to none, in the 2004 World Series.

During the 2005 season, Francona was hospitalized after complaining of severe chest pains. Tests revealed significantly clogged arteries, but it was concluded that Francona did not suffer a heart attack.

Three years later, the Sox won the American League East Division, finishing two games ahead of the New York Yankees. Under Francona's leadership, the Sox swept the Angels in the Division Series before dropping three of the first four games to the Cleveland Indians in the ALCS. The Sox, facing elimination, went on to win their next three games, defeating Cleveland to advance to the 2007 World Series, where they swept the Colorado Rockies in four games. Terry Francona is the only manager in Major League history to win his first eight consecutive World Series games and just the second manager to guide two Red Sox clubs to World Series titles, the other being Bill "Rough" Carrigan who led Boston to back-to-back championships in 1915 and 1916.

As of October 28, 2007, Francona's career regular-season managerial record is 660-636 (.509), while his post-season record is 22-9 (.710). Amongst managers who have managed at least 20 post-season games, he has the highest winning percentage. Francona is the first manager in MLB history to win his first 8 games in the World Series.

On February 24, 2008, the Red Sox announced that they had extended Francona's contract. Instead of expiring at the end of the 2008 season, it will expire after the 2011 season. The team also holds club options for 2012 and 2013. Francona is guaranteed a total of $12 million over the first three years of the contract between his salary and the $750,000 buyout he will receive if his 2012 and 2013 options are not exercised. The package, if the options are exercised, is worth about $20 million.