Thomas Furnaces from across the flooded limestone quarry 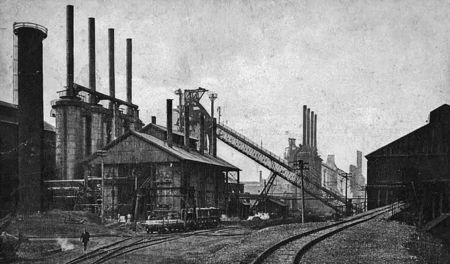 Thomas Furnaces was a complex of iron furnaces constructed near Birmingham by the Pioneer Mining and Manufacturing Company. Company founder David Thomas was part of an iron-making family in Pennsylvania. He was convinced to invest in the Birmingham District by his friend, Giles Edwards, who had supervised production at the Shelby Iron Works in the 1860s.

The Pioneer Company was incorporated by Thomas and his son John on December 30, 1868. With Baylis Grace as agent it purchased property at Tannehill and Goethite and other locations known to have iron ore deposits. In 1886 the company purchased the 2,000-acre Williamson Hawkins plantation on VIllage Creek southwest of Birmingham for about $4 an acre. In addition to water access, the property included its own limestone, ore, and coal deposits and was therefore considered ideal for ironmaking.

The first Thomas Furnace, 75 feet tall with a 17-foot hearth, was blown in on May 15, 1888, with Thomas' grandson Edwin in charge of operations. The company purchased coke from the Cahaba Coal Company until it completed a battery of beehive coke ovens at its mines in Sayreton. It soon began supplementing its own supplies with coal from the nearby Pratt mines. A second furnace, built as a twin to the first, was put into blast on February 22, 1890. Meanwhile the workmen settled into a compact village, which came to be known as Thomas. Those living outside the company-controlled village settled nearby in East Thomas.

The Republic Steel & Iron Company purchased an option on the Pioneer Company's capital stock in 1898 and exercised it the following year, acquiring the Thomas Furnaces complex. Republic expanded the plant with a third blast furnace, 90 feet by 18 feet, which debuted on June 13, 1902. It was, at the time, the largest in the Birmingham District, capable of producing 250 tons per day. In 1903 Furnace No. 2 was expanded to the same size. Furnace No. 1 was also expanded, but to 85 feet by 20 feet.

The furnace operation thrived through the 1910s and 1920s. A new battery of Koppers-Becker coke ovens was installed at Thomas and put into operation on October 21, 1925. In April 1930 the Republic Steel Corporation acquired all of Republic Steel & Iron Company's properties and used the iron furnaces to supply its steel plant at Alabama City. In 1939 the No. 3 furnace was removed and the other two rebuilt with 16-foot hearths and 83- and 88-foot stacks.

The residential district was subdivided and redeveloped in the 1950s. The furnaces continued operating until 1971. The property was later purchased by Wade Sand & Gravel.