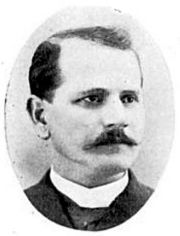 Thomas Carson McDonald (born November 2, 1854 in Greensboro, Hale County; died April 10, 1923 in Birmingham) was a businessman and chief of the Birmingham Police Department from 1893 to 1898.

McDonald was the grandson of a Scottish-born Virginian who settled at St Stephens when it was the territorial capital of Alabama. Thomas' father, William McDonald, was born in Greensboro in 1824 and became a successful merchant there. In 1871, however, business faltered and he moved with his wife and son to the newly-established city of Birmingham, investing $200 to buy the second lot sold by the Elyton Land Company. He prospered, served on the Birmingham Board of Aldermen (including a stint as acting Mayor), and died in 1891.

Thomas attended the common schools in Hale County until the age of 17, when he joined his father's business in Birmingham. He helped to erect their home and place of business, hauling material by oxcart. In 1878 he moved to Tuscaloosa, but returned seven years later with his wife, the former Annie Brackett, to serve on the Birmingham Police Department and to invest his savings in real estate. He also founded the White Swan Laundry.

McDonald spent eight years on the force, rising from patrolman to sergeant, lieutenant, and captain before he was elected Chief of Police. In 1911 he was elected to the Alabama House of Representatives. He died in 1923 and is buried at Elmwood Cemetery.