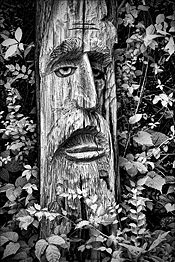 A Tingle carving at Orr Park. Photo by DelosJ

Timothy Tingle (born 1958 in Chattanooga, Tennessee) is a miner, farmer and author, and also a part-time woodcarver responsible for creating nearly 40 public works of art from dead cedars in "Tinglewood" at Montevallo's Orr Park.

Tingle graduated from Montevallo High School and spent three years at the University of Montevallo. He took a job with Jim Walter Resources in the summer of 1979 and has worked in their No. 3 and No. 7 mines. As a Fire Boss he installs and maintains water pumps and patrols for other mine hazards.

Outside of mining, Tingle stays busy carving and teaching woodcraft. He has also written and published several fantasy/science fiction novels, often drawing from his experiences traveling around the world.

He carved his first "tree sculpture" during the Blizzard of 1993 and, encouraged by city officials, has continued to add new carvings to the park, often faces peeking from behind the bark or fantastic animals. He uses chainsaws as well as chisels and other tools to create the works.

Tim and his wife Nanette live on an 8-acre farm near the Pea Ridge community and have five grown children: Grace, Andrew, Joseph, Chris and Kevin.