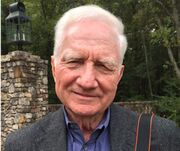 Thomas Earl Lankford (born September 20, 1935 in Piedmont, Calhoun County; died December 31, 2020 in Gadsden) was a reporter and photographer for The Birmingham News during the 1960s, and later an editor, public relations professional, and truck driver.

Lankford was the son of Robert and Mary Asalee Kilgo Lankford. He grew up in Hokes Bluff in Etowah County where his father worked at a steel plant. He played football at Hokes Bluff High School and graduated as salutatorian of his 1953 class. He then enrolled at the University of Alabama as a journalism major. He was exceptional for having joined "The Machine" without having pledged to a campus fraternity. During his senior year he served as editor of The Crimson White student newspaper. He continued at Alabama, earning a master's degree in journalism and began his career in Columbus, Georgia before joining the Birmingham News as a police reporter in 1959.

As a young reporter Lankford worked closely with law enforcement and with assistant publisher Vincent Townsend during the 1960s, often participating in surveillance operations that exceeded ethical standards now widely accepted by mainstream journalists. He won numerous Associated Press awards for his reporting, and with his camera, he documented many events that took place as part of the Civil Rights Movement around the state.

Lankford worked with police officials, including Bull Connor to portray the Birmingham Police Department positively, for which he was given access to crime scenes and advance notice of newsworthy operations. That relationship sometimes extended to producing political favors. During a bitter 1961 mayoral runoff between former assistant U.S. Attorney Tom King and Connor ally Art Hanes, Lankford was invited to be present at Woodrow Wilson Park when King, leaving a meeting with Connor, would encounter a Black man who had been paid to offer him a handshake. The smear led the News to switch its endorsement to King on May 14. Hanes won the May 30 runoff.

Because he was known as "Bull's boy," Lankford was spared a beating when he was caught photographing the violent reception given the Freedom Riders on May 14, 1961. Instead the mob took the film out of his camera, offering him $1 as compensation. On the other hand, Lankford also wiretapped a meeting between Connor and members of the Birmingham Firefighters Association Local 117 during which Connor promised raises in exchange for their opposition to a referendum to change the city's form of government. Townsend used the tape in a radio advertisement promoting the change.

In late 1963, during the federal investigation of the bombing of 16th Street Baptist Church, Lankford went so far as to shoot at J. B. Stoner's empty car outside the National States Rights Party offices, from the back seat of a car driven by an FBI agent. It was hoped the stunt would provoke Stoner to make calls from the phones the FBI had tapped and possibly implicate himself.

Lankford also became involved in the FBI's surveillance of and efforts to discredit Martin Luther King Jr. He listened to a wiretap of A. D. King's telephone and rode with FBI agents to what they believed would be a sexual liaison planned by the King brothers with a group of women, where Lankford was expected to capture incriminating photographs. The attempted sting was unsuccessful.

Beyond his law enforcement relationships, Lankford conducted surveillance on behalf of Townsend, who sought intelligence on any Civil Rights activities that would affect the business community.

Lankford left the crime beat for an editor's desk in the late 1960s and left Birmingham to become editor and general manager of The Huntsville News. While there he was part of a group contracted in 1971 to recommend how the state should spend federal grant funds for law enforcement. Governor George Wallace found the group's proposal for, "black-clad, nighttime police force of shock troops similar to Nazi storm troopers," to be "repugnant." The state filed a lawsuit alleging that the group misrepresented their credentials, and they returned $20,000 of their $91,570 commission.

Lankford retired from journalism in 1977. He began his public relations career representing petroleum interests in New Orleans, and spent nearly two decades in Saudi Arabia, including twelve years with the Saudi Royal Commission. He met Chalermporn "Tan" Changseang during a visit to Thailand in 1986 and married her the following year. In 1999 he returned to Alabama, intending to operate the family farm. He took up driving a long-haul truck until suffering a heart attack in 2008. After that he worked as a greeter at a Sam's Club warehouse store.

Lankford died in December 2020 of complications from COVID-19. He was survived by his wife, two daughters, and five grandchildren. He was buried at Young's Chapel Methodist Church in Piedmont.