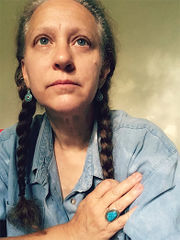 Tracie Noles-Ross (born c. 1962) is a multidisciplinary artist. She graduated from Ensley High School and holds a B.A. in Visual Storytelling from the University of Alabama at Birmingham. Noles-Ross’ uses a range of techniques and media to create objects and installations that reflect observational studies of the natural world, and her place in that world. She creates layered mixed media imagery to explore ideas about her personal history, the body in nature, the precariousness of human relationships to nature and each other within the constructs of southern culture. Through the merging of mythology, ecology and storytelling, Noles-Ross’ work examines how identity and personal narratives are defined by the land, history and the mythic imagination.

Works on permanent display in Birmingham, Alabama include Poustinia, a conceptual installation commissioned by and created for the Red Mountain Community School, Letters Home, a low relief sculpture displayed in the Regiment of Columns in the Alabama Veterans Memorial Park and Back to Nature, displayed at the Lister Hill Library on the campus of UAB, a public art project of the Alabama Psychological Association Foundation.

Noles-Ross was the featured artist of the 12th annual Moss Rock Festival. She illustrated The Urban Bestiary: Encountering the Everyday Wild by award winning author and naturalist Lyanda Lynn Haupt (published by Little, Brown). Noles-Ross has been associated with Bare Hands, The Thomas Project, The Fifth Gate Art Center and The Flood and Mystic Chamber Salon. She became a member of the Ground Floor Contemporary art collective in 2018.

Noles-Ross received an Award of Excellence from The University of Alabama at Birmingham Women’s Studies Program for curating Firsts: The Personal and the Historical, an exhibition honoring Women’s History Month. She is a recipient of an Artist’s Grant, from Anderson Ranch Arts Center, Snowmass, Colorado and a Regional Artists Project Grant from The Contemporary Arts Center in New Orleans. In 2004 Noles-Ross’ journey to adopt her eldest daughter was featured in the China's Lost Girls episode of National Geographic Ultimate Explorer.

Noles-Ross’ work was included in B18: Wiregrass Biennial, Wiregrass Museum of Art, Dothan, Alabama, and she is the 1st place winner of PaperWorkers Local’s second annual juried exhibition ‘Water of Alabama,’ a juried response to Marianne Nicholson’s Birmingham Museum of Art exhibition ‘Waterline,‘ jurored by Graham Boettcher. Her work Do Unto Others Downstream, a mixed media commentary on environmental conditions along a tributary of the Black Warrior River, earned her the honor of being featured in a one woman exhibition titled, Madwoman in the Woods at Birmingham’s PaperWorkers Local October of 2019.