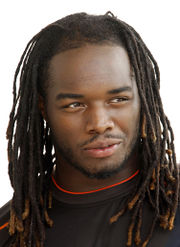 Richardson played football and competed in track and field for Escambia High School in Pensacola. His best sprint time in high school was 10.5 seconds in the 100-meter dash and his record on the long jump was 6.55 meters. As a running back, Richardson racked up 2,100 yards and 25 touchdowns on 228 carries as a senior. He was named "National Football Player of the Week" by ESPN RISE after rushing for 419 yards and six scores in a single game in September 2008. He was selected for the Florida Sportswriters Association's All-State Team, was the state's 5A player of the year, and a finalist for the "Mr Football" award. He was also named to several high school All-American teams and to the Orlando Sentinel's "All-Southern Team".

Richardson was highly recruited by college football teams, and ranked as the overall second-best running back by Rivals.com. He accepted a scholarship offer from the University of Alabama over offers from Florida, Florida State and LSU.

Head coach Nick Saban referred to Richardson as "the real key to the class". During his freshman season Richardson shared time with Roy Upchurch and Mark Ingram Jr. He was named Southeastern Conference Freshman of the Week twice in his first four games and joined teammates Barrett Jones and Nico Johnson on the SEC's All-Freshman Team. His 109 rushing yards and two touchdowns helped the Crimson Tide defeat the Texas Longhorns in the 2010 BCS National Championship game.

With Ingram recovering from an injury, Richardson started the first two games of the 2010 season. He amassed a career-high 144 yards on 22 carries against the Penn State Nittany Lions in week 2 and was named Co-SEC Player of the Week. He finished the season with 700 rushing yards and six rushing touchdowns along with 266 receiving yards and four more touchdown catches. He also returned kicks, amassing another 634 return yards with one score.

Richardson was the featured tailback for the 2011 Crimson Tide team. He bettered his career high with 183 rushing yards and four touchdowns against the University of Mississippi, then ran for 203 yards in the Tide's decisive victory over Auburn in the 2011 Iron Bowl.

Richardson was the first Alabama player to win the Doak Walker Award, and finished third in that year's Heisman Trophy voting. He ran for 96 yards in the 2012 BCS National Championship Game, a second championship ring earned in the Tide's rematch against LSU.

His 1,679 rushing yards broke the record set the previous season by Mark Ingram, and his total of 24 touchdowns tied Shaun Alexander's SEC record. As the top running back prospect going into the 2012 NFL draft, Richardson elected to leave Alabama after his junior season. He underwent "minor" knee surgery in February and did not participate in drills at the NFL Combine. He did escort cancer survivor Courtney Alvis to her senior prom at Hueytown High School that April.

Richardson was selected third overall by the Cleveland Browns and agreed to a four-year contract worth a guaranteed $20.4 million with a $13.5 million signing bonus.

In August of that year, Richardson underwent additional surgery to remove fragments of cartilage from his left knee. He did not participate in pre-season games, but did get 19 carries in the season opener against the Philadelphia Eagles, but gained only 39 yards. In his second week he reached 109 yards in 19 carries against the Cincinnati Bengals and also scored once on the ground and again in one of four pass receptions.

In his second season, Richardson only appeared in two games, rushing for 105 yards on 31 carries, before he was traded to the Indianapolis Colts for a first-round pick in the 2014 draft. He scored on his first rushing attempt in a Colts uniform, but did not perform to expectations over the course of the season. Veteran Donald Brown took over as the team's featured back on December 1, but was injured soon later.

In 2014 Richardson split carries with Ahmad Bradshaw and returned to a featured role when Bradshaw was injured in week 11. After two weeks, though, he had only gained 88 yards on eight carries, including a 49-yard score, and Dan Herron was promoted to primary rusher. Richardson was suspended for violating team rules and did not appear in the Colts' last two playoff games.

Richardson was waived after his first season with the Colts and signed a two-year, $3.85 million contract with the Oakland Raiders in March 2015. He missed training camp due to pneumonia and was cut before the regular season. He signed with the Baltimore Ravens in 2016 but again failed to report to training camp. He was cut from the roster on August 2 and was not picked up on waivers.

Richardson was arrested at the Hyatt Place in Hoover on February 17, 2017. He was charged with 3rd degree domestic violence and released on bond.