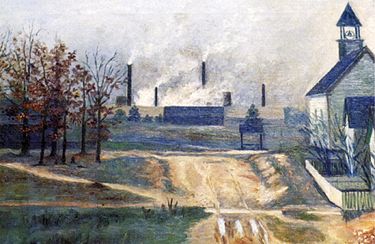 Trinity Methodist Church was a Methodist church founded in 1889 in the vicinity of the Sloss and Mary Pratt furnaces on Birmingham's Southside.

The congregation was organized as the Southside Mission of the North Alabama Annual Conference of the United Methodist Church (at that time the Methodist Episcopal Church, South) under the guidance of Reverend John Robertson. The young church paid $2,000 for two lots on the southeast corner of Avenue F and 30th Street on September 20, 1890 and erected a small wood-frame chapel with a bell tower on the site, across from Benjamin Worthington's old peach orchard. The first services were held on March 15, 1891 with C. B. Riddick of the First Methodist Church leading in the dedication.

The young church struggled financially, and gave up its second lot, still vacant, to settle its mortgage. Membership grew slightly, but by 1895 receipts were insufficient to maintain a full-time pastor, and the pulpit was turned over to circuit preachers. By 1903, however, the church had regained its footing and was able to pay Reverend Lorenzo Patterson and to come off the Board of Missions' support rolls.

In 1909, with the development of the Birmingham Country Club at Lakeview Park and new residential subdivisions planned by Robert Jemison Jr, the church decided to move a few blocks South. The trustees paid $4,000 for two lots on the northwest corner of 32nd Street South and Lower Highland Avenue (now Clairmont Avenue) and, perhaps inspired by the successful move of Worthington's old plantation house, contracted for the physical relocation of their existing church building using log rollers and mules.

Soon a small Sunday School room was added onto the building as the move attracted new members. The congregation, however, declined again after 1916. Some left for the larger Avondale Methodist Church nearby, or more established First Methodist or the newer Highlands Methodist, now more accessible due to the further development of streetcars. The church returned to dependency on the Board of Missions to finance its operations.

Umsted Pitts came to Trinity in 1921 and briefly reversed the decline in membership. The church built a small parsonage during his three-year tenure and showed signs of growth. However, when the Board of Missions cut off its financial support for the church and one of its most generous trustees, W. W. Garrett, died in 1925, the congregation began planning to disperse. The church sold its property to the City of Birmingham on March 13, 1926 for $16,750. After retiring its debts the remaining funds and the Trinity name passed to a new congregation in Edgewood. Some of the former members of Trinity who had moved Over the Mountain became charter members of the new congregation, which held its first services on October 30.