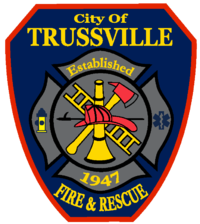 Trussville Fire & Rescue serves the City of Trussville by responding to fires and medical and hazardous materials emergencies.

The department was founded in 1947 with Richard Beard as department head and H. W. Suttles as fire chief. After efforts to obtain a surplus fire engine from the U.S. Department of War proved fruitless, members of the Trussville Business Men's Club and Trussville Civitan Club led efforts to raise $9,000 to purchase a fire engine. The department continued to operate on a volunteer basis, with a single fire station, for the next five decades.

In 1998 the city authorized the creation of a professional fire department. Russell Ledbetter was hired as chief and two new fire stations were constructed. The department relocated from the Trussville Civic Complex at 131 Main Street to the former Hewett Elementary School on Cherokee Drive during his tenure. The current chief, Tim Shotts, was promoted in 2016, following Ledbetter's resignation amid an ethics investigation.

As of 2014, the department consists of 4 administrators and 30 full-time professional firefighters, who are also trained as emergency medical technicians. The Trussville Volunteer Fire Department supplements that force with 87 trained volunteers.