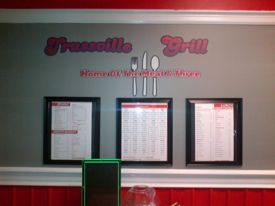 Trussville Grill was a restaurant at 199 Beechnut Street at Chalkville Road in Trussville. The meat and three was opened in December 2013 by Levert Jackson, former owner of University Grill near UAB.

After the quickly approaching winter weather on January 28, 2014 left Roper Road impassable, the restaurant remained open to feed those stranded and provide a warm place to wait. After witnessing the kindness of strangers helping people get to their homes on top of Roper Hill, Jackson, Jana White and some of the restaurant's regular customers started the charity Facebook page Trussville Cares: With a Husky Heart. The charity's first recipients were the family of Blanca Canales, who died after being struck by a car on Chalkville Road.

Jackson decided not to renew the lease and closed the restaurant on November 7, 2014, with plans to open a karaoke bar and restaurant.