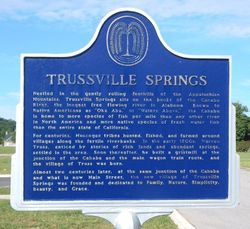 Trussville Springs is a New Urbanist inspired community being constructed on 167 acres adjacent to the Cahaba River just off Highway 11, to the north east of downtown Trussville near Trussville Civitan Park. It is being developed by Trussville Springs LLC with the original master plan created by the world renowned Duany Plater-Zyberk & Company of Miami, Florida inspired by the depression-era Cahaba Homestead Village. The completed project was originally planned to contain 568 homes to be built over the course of five phases. 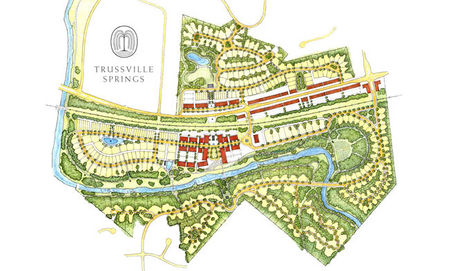 Hearthstone Properties partners Barry Stalnaker and Bill Lewis purchased the site, which included an abandoned sandstone quarry and the former sites of Continental Electric and Birmingham Tank, in 2002.

Originally called Mainstreet Trussville, the project's master plan design charrette took place during the week of June 21-24, 2005, at the Continental Electric Building at 6655 Gadsden Highway. During the week, citizens of Trussville were encouraged to participate in the process of creating the initial plans for the development. Andrés Duany was present for the entire duration of the charrette, and by the end of the week an initial plan, which envisioned the proposed development as an extension of Trussville's existing downtown, was created.

The Cahaba River Society was invited to participate in planning and design in order to insure that the Cahaba River, previously widened, was restored and protected as much as possible in the development of the site. Among their recommendations were to remove existing berms and to introduce new rock formations to restore riparian habitats damaged by earlier flood-mitigation works. An expansive green space is to be left undeveloped along the river's natural flood plain, with trails which will connect to Trussville's existing network of walking paths. Large areas choked by invasive privet were also cleared.

After the charrette was complete, the project was formally announced as Trussville Springs on Tuesday, June 27, 2005, marketed as akin to the Mt Laurel development in Shelby County. The project was then presented as a 586-home community to the Trussville Planning and Zoning Board on November 10, 2005. The mixed-use community is to feature retail and restaurant space in addition to townhouses, elevated cottages near the river, five-story condominium buildings and single-family homes.

On June 20, 2006, the Planning and Zoning Board approved the first phase of the project, consisting of 42 town houses, 50 condominium units, 18 cottage homes and 19 river-front homes. By August, site clearance began with the demolition of about 100,000 square feet of warehouse space and the former Continental Electric plant. Only a "handful" of homes were completed before progress was drastically slowed by the 2008 recession.

Approximately 46 cottage homes, 10 river homes, 15 townhome units, a community swimming pool, fishing pond, trail, storm shelter, and a fire pit have been completed. A playground is currently being constructed. Only a few River home lots remain in Phase I. As of May 21, 2016, only two completed new homes are listed active without a contract, including the model home. Only one resale home is listed active.

The first home in Phase II of construction has been completed, and 3 others are currently being built. 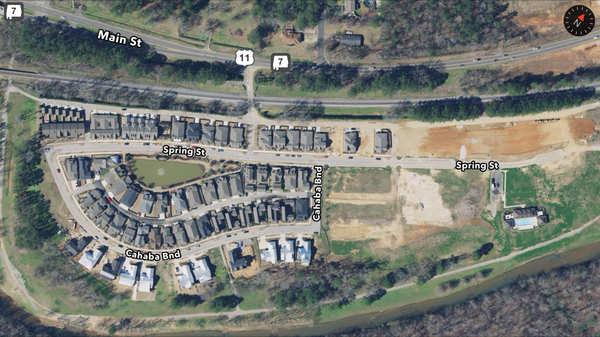 Trussville Springs as of early 2016.

Total green space for the project has been estimated to be 39.4 acres of land, or 23% of the development. A 1 mile river walk exists starting from the Norfolk Southern Railroad crossing at the Cahaba River, and ending at the edge of Trussville Springs Property downstream. Trussville Springs property is currently exclusive to owners and guests. However, this policy may be reassessed upon project completion.

Planning for the primary entrance originally envisioned, referred to by residents as the "permanent entrance" has taken approximately 8 years and hundreds of thousands of dollars in engineering fees. Plans were originally submitted to ALDOT for approval in 2007. In addition to approval from ALDOT, the plans also required coordination with Trussville Utilities and Norfolk Southern Railroad. On December 6, 2013, ALDOT delivered a permit to construct turn lanes for a permanent entrance to Trussville Springs. Due to conflicting opinions on design, and a mishap involving required preconstruction signage on Highway 11, construction was never initiated with exception to some relocation of soil. In 2015 new plans were developed in response to increasing demand and growth of the population. As of November 2015 Barry Stalnaker told ABC 33/40 that approval from Norfolk-Southern is still pending.

On May 23, 2016, Barry Stalnaker told WBRC that the design for the new entrance has been approved by ALDOT and Norfolk Southern Railroad. Barry Stalnaker further reports that the next step is contract finalization.

A one lane, partially paved trail, connects the current temporary entrance to the alley of Spring Street under the Norfolk Southern Railroad crossing of the Cahaba River. The path itself lies on property owned by Trussville Springs LLC, and the area along the tracks is owned by Norfolk Southern Railroad. This entrance/exit was gated and locked in 2015 by Norfolk Southern Railroad, following complaints from a resident questioning its safety. At this time, the key for this gate is maintained by the Trussville Fire Department for emergency use. However, on May 20, 2016, there was some confusion by employees of the Trussville Fire Department as to the existence of a key, and caused a two hour delay in its opening.

Responsibility for this problem is often debated. According to Trussville City Code of Ordinances, Article VII, Sec. 86-311., "It shall be unlawful for the directing officer or the operator of any railroad train to direct the operation of or to operate the train in such a manner as to prevent the use of any street for purposes of travel for a period of time longer than five minutes. This section shall not apply to trains or cars in motion, other than those engaged in switching." Furthermore, Article VII, Sec. 86-312., "It shall be the duty of all persons in charge or control of any railroad train, locomotive or car upon any street crossing to immediately clear such crossing upon the approach thereto of any authorized emergency vehicle sounding warning of approach."

Design of the right of way

The right of way of Trussville Springs is designed in accordance with the style of a Traditional Neighborhood Development. This includes:

Trussville Springs is governed by the Homeowners Association Board, consisting of three members, including the founder Barry Stalnaker and his appointees. Barry Stalnaker and the board has approved of neighborhood directed committees that plan, volunteer, discuss, and make recommendations for individual jurisdictions. Committees currently exist for the Pool Complex, Grounds/Maintenance, Children's Recreation, and others in the development phase. This form of leadership is planned to continue until the completion of 80% of the development has been reach. Homeowner's Association Dues are currently $600/year.