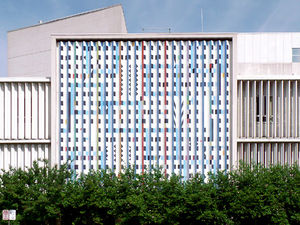 UAB Callahan Eye Hospital (formerly the Eye Foundation Hospital) is a ophthalmology surgery center and ocular trauma center affiliated with UAB Hospital. The hospital was founded in 1963 by the Eye Foundation, which had been established in the 1950s through the efforts of Doctor Alston Callahan and the generosity of industrialist Robert Ingalls, whose granddaughter, Barbara, had been treated by Callahan.

The hospital is located at 1720 University Boulevard. The front of the building features the monumental Complex Vision lenticular mural by Israeli artist Yaacov Agam, which was completed in 1969. The artwork and facade of the building were featured on the cover of South Central Bell's 1977 "Greater Birmingham" telephone directory. The building is adjacent to the Henry Peters Building that houses the UAB School of Optometry.

In 1971 the Eye Foundation Hospital became a residency center for the UAB Department of Ophthalmology. It officially joined the UAB Health System in 1997. The center was renamed in honor of Callahan in 1997. Its president and CEO is Brian Spraberry.

The hospital has over 150 medical professionals on staff, including 80 surgeons. It treats around 23,000 patients each year, including 5,600 emergency room visitors, and performs nearly 10,000 surgeries per year in its nine specially-constructed operating rooms. The residency program has trained more than 200 ophthalmologists. Its staff founded the American Society of Ocular Trauma and maintains the United States Eye Injury Registry.

Henry Peters building and the UAB Callahan Eye Hospital in 2016