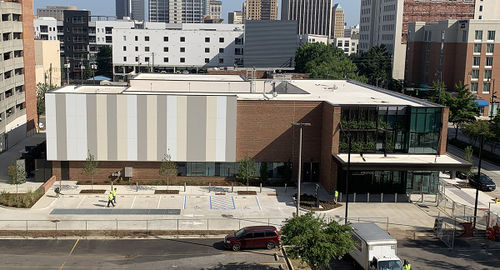 The UAB Proton Therapy Center is a cancer treatment facility in the UAB Medical Center which uses proton therapy to destroy cancerous cells. The facility is owned by Proton International of Louisville, Kentucky with "ProBeam" compact single-room therapy equipment. When it was dedicated it was one of only 26 proton therapy treatment centers in the United States.

The 3-story Proton Center was constructed over UAB Parking Lot 55, the former Parliament Hotel site on the 400 block of 20th Street South, which is owned by the UAB Educational Foundation and leased to Proton International. It is staffed by medical professionals and researchers from the UAB Comprehensive Cancer Center.

Construction began in 2017, with completion in 2019. The cyclotron itself, a 90-ton, $25 million instrument built in Germany for Varian Medical Systems of Palo Alto, California, was nicknamed "Emma". It was delivered and craned into the building on March 4, 2019.