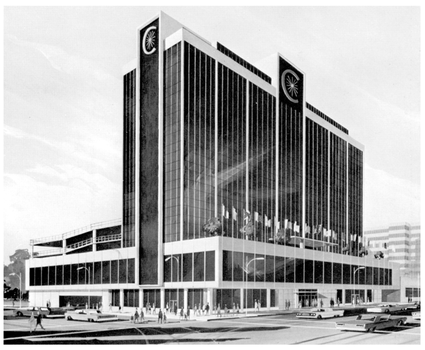 The UAB administration building was built in 1967 as the headquarters of Central Bank and Trust. The 13-story, 165-foot tall building is located on 20th Street South between 7th Avenue South and University Boulevard.

The building was designed by Warren, Knight & Davis in a modern style, with pronounced vertical ribs on the brick-veneer facade. A rendering shows a dark glass cladding in place of the brick. The building steps back dramatically from its footprint at the fourth floor, creating broad roof terraces facing 20th Street and 7th Avenue. A 5-story parking garage is attached to the rear (east side) of the building. The rest of the building continues up another 10 floors as a wide slab shape. The central circulation core and elevator penthouse are expressed on the roofscape. The architects moved their offices to room 412 in the Central Bank Building after it opened.

In an interview with The Kaleidoscope, bank president Harry Brock Jr noted ties between Southside's first modern skyscraper and the College of General Studies which later became UAB. He noted that the college was renting office space in the new building from its opening, and remarked that the line of flags across the front terrace would represent the nations from which medical graduate students had come to Birmingham. He also mentioned that the bank was considering leasing parking spaces in its deck after hours to help commuting students finding it hard to find parking, and suggested that the bank's cafeteria hours might be made convenient for students.

In 1970 the basement dining area was operated as a Kopper Kettle Cafeteria.

After the offices of the bank, which had changed its name to Compass Bank, relocated to the Daniel Building in midtown, the building was purchased by UAB in 1993 and renovated for use as an administration building. Large illuminated signs with UAB's logo replaced the Central Bank logo at the top of the building, and the exterior walls were painted.

The building still housed a Compass, BBVA Compass and BBVA banking branch on the ground floor with drive-through windows in the parking garage until June 2019, when the bank relocated their Southside branch to The Waites.