United States District Court for the Northern District of Alabama 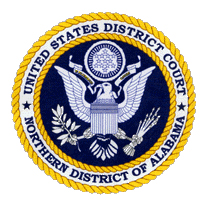 From 1893 to 1921 the court was housed in the U.S. Court House and Post Office on 2nd Avenue North and 18th Street. It moved to the large neoclassical Federal Courthouse Building on 5th Avenue North in 1921 and operated from there until the completion of the Hugo L. Black Federal Courthouse in 1987. The court also operates from the Tuscaloosa federal building in Tuscaloosa, and from federal courthouses in Anniston, Decatur, Florence, Gadsden and Huntsville.

When decisions of the court are appealed, they are appealed to the Eleventh Circuit Court of Appeals based in Atlanta, Georgia's Elbert P. Tuttle Federal Courthouse.