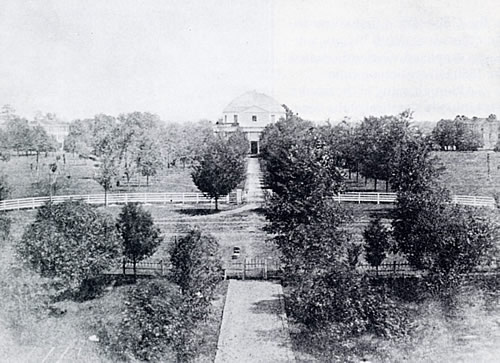 The University of Alabama Rotunda in 1859

The building was designed by English-born architect William Nichols, who had come to Tuscaloosa in 1827 to accept an appointment as official state architect and to oversee construction of his design for the State Capitol. He was soon commissioned to design the University campus, which would consist of seven buildings with the Rotunda, centrally sited at the top of the sloping quad as its focus. The arrangement of buildings, as well as the design of the 70-foot diameter, 70-foot tall domed structure were modeled after the "academical village" designed by Thomas Jefferson for the University of Virginia. Nichols relied on a published engraving of Jefferson's scheme, made in 1822 by Peter Maverick, and known as the "Maverick plan". A print had been donated to the trustees of the university by attorney Jesse Beene.

Jefferson's rotunda, inspired by a drawing by Andrea Palladio of the Roman "Pantheon", was 77 feet in diameter, half of the scale of the Roman original. Because it was designed to house the university's library rather than a church, it was intended to embody "the authority of nature and power of reason". Alabama's Rotunda subverted Jefferson's humanism by accommodating a chapel on the ground floor as well as the university's library on the second floor. A small collection of natural history specimens was displayed in the library.

The Rotunda and other campus buildings were burned to the ground on April 4, 1865 by troops under the command of Thomas M. Johnston, sent by General John Croxton who had been detached to Tuscaloosa by James H. Wilson during "Wilson's Raid" through Alabama into Georgia. Johnston's orders were to destroy the public buildings at the university, which was then a military school in service to the Confederate army. University librarian Andre Deloffre, claiming immunity as a citizen of France, attempted to dissuade the officers from burning the library in the Rotunda. The officers sought clarification from Croxton back his headquarters in the Charles Fiquet residence in town before proceeding. One volume, an 1853 edition of the Koran, was saved from the fire and later returned to the library.

The Amelia Gorgas Library was built partly over the site of the Rotunda's ruins in 1939, but the foundations of the southern half of the round building were preserved and remain visible outside the library on the quad.