The University of Montevallo is a four-year public university located in Montevallo. Founded in 1896, it is Alabama's only public liberal arts university. Programs are offered through the Michael E. Stephens College of Business, College of Arts and Sciences, College of Education, College of Fine Arts, and graduate studies in English, Speech-Language Pathology and Education. The university president is John W. Stewart III. 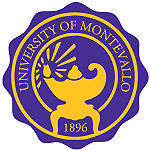 The University of Montevallo opened on October 12, 1896 as the Alabama Girls’ Industrial School (AGIS), a women-only technical school that also offered high school-level courses. AGIS became the Alabama Girls’ Technical Institute in 1911, further adding "and College for Women" in 1919. The school gradually phased into being a traditional degree-granting institution, becoming Alabama College, State College for Women in 1923.

The school's supporters lobbied the Alabama Legislature which passed a bill on January 15, 1956 that dropped the designation "State College for Women", effectively making the school coeducational (though its student body still maintains a 7:5 ratio of women to men). The first men entered the school that same month. On September 1, 1969, Alabama College was renamed the University of Montevallo. The school paper remains The Alabamian.

Montevallo is located in the geographic center of the state of Alabama in an area rich with Civil War history. With 2,825 students, the university generates a significant economic impact on the surrounding communities in Shelby County.

Many of the buildings on campus predate the founding of the college, including King House and Reynolds Hall. The King House is reserved for special guests of the campus, and Reynolds Hall is still used by the Theater Department and alumni relations. King House was reportedly the first home in Alabama to receive pane glass windows. 28 buildings on campus are listed on the National Register of Historic Places. The main campus was planned by the Olmsted Brothers.

In 2020 the University concluded a 7-year capital campaign that raised $36.5 million from more than 10,000 donors. The fund allowed for construction of a $25 million Center for the Arts and 3D Art Complex; a new building for the Stephens College of Business; new track and field, lacrosse and softball facilities; and renovations to Strong Hall and Harmon Hall. It also funded 115 new scholarships, an endowed academic chair and two endowed professorships; and boosted the University of Montevallo Traditions Fund, which in turn supports College Night, Founders' Day, and The Alabamian newspaper.

The University of Montevallo fields 10 NCAA Division II athletic teams that compete in the East Division of the Gulf South Conference. Men's athletics include baseball, basketball, soccer, golf. Women's athletics include basketball, soccer, golf, cross-country, tennis and volleyball. The school mascot is a Falcon, and the colors are purple and gold. There is no official fight song.

Main article: President of the University of Montevallo

The oldest tradition at Montevallo is called College Night, an intramural competition between the Purple Side and the Gold Side. The tradition officially began on March 3, 1919, in honor of the school adding the name "college" to its title. The homecoming competition consists of sports events, management of the side finances, spirit, and a student written, produced, and performed play. College Night has been cited by some as the oldest homecoming tradition in the United States.

Traditionally, Crook Week was a week in late October when the senior class women would hide the "crook"--a staff shaped roughly like a shepherd's crook--and give obscure clues for the underclass women who were to find it. At the end of Crook Week was Senior March. When the chimes struck thirteen, if the underclass women did not find the crook, the seniors march on them, getting them out of their rooms and onto Main Quad where they would have a shaving cream and water ballon battle. If the underclass women found the crook, they were safe that year. This part of the tradition ended in the 1990s because the administration deemed that it amounted to hazing.

Today, Crook Week occurs the week before Founder's Day. The administration hides the crook and leaves clues as to where it can be found. The finder of the crook gets recognized at Founder's Day with a small cash prize.