Vestavia Hills High School (VHHS) is a public high school in the Vestavia Hills City Schools system serving 9-12th graders in the city of Vestavia Hills. It has been recognized for consistent academic excellence, and its athletic teams have won numerous championships. The student enrollment for 2013-2014 was 1,902. The current principal is Tyler Burgess.

Before Vestavia created its own system in April 1970, high school students from the area attended Jefferson County's Berry High School. Beginning that fall, students already at Berry could decide to complete their diplomas there, with Vestavia paying tuition to the county, or could transfer. For the 1970-1971 and 1971-1972 academic years high school classes were taught at Vestavia Hills Junior High School, as well as at the Vestavia Hills Civic Center, and Vestavia Hills Methodist Church. The present school building, designed by Evan Terry & Associates, was completed in 1972 on land donated by Isadore and Hortense Pizitz. In recognition of their generosity, Vestavia's former junior high school was renamed Pizitz Middle School.

The new system fell under desegregation orders issued a federal appeals court in Stout vs. Jefferson County Board of Education.. Specifically the new system was required to hire a certain number of African-American teachers, and to provide free transportation and enrollment to the residents of an unincorporated area of Oxmoor Valley.

In 2008 the Vestavia Board of Education awarded a $13.8 million contract to Taylor & Miree Construction for renovations to the school designed by Lathan Associates Architects. The renovations included 29 new classrooms and labs and a dance studio, as well as a new senior dining area in an existing courtyard. Additional interior renovations were completed during the summer of 2010.

At Vestavia Hills Junior High, the athletic teams were referred to as the "Vikings". During the first year of high school classes, the student body voted for a mascot for the new institution. Four choices were presented, with illustrations of proposed team uniforms. Following lengthy discussion, the name "Rebels", with a mascot copied from Ole Miss' "Colonel Reb" and a red and white uniform resembling the Alabama Crimson Tide was chosen over "Lions", "Cowboys" and "Eagles".

The Confederate battle flag originally appeared on the school's coat of arms and on the sides of the Rebels football helmets, and the song "Dixie" was played by the school band (using the same arrangement by Everett Lawler that had been performed by Berry High School's band). Students involved in the selection recall that the Rebel name appealed to them because they were breaking away from the County school system, and for the general prominence of Rebel flags and Dixie in popular culture. There was no recollection that the same symbols' common use by those resisting federally-mandated school integration was a factor in the choice.

Over time, the use of Confederate symbols became a source of controversy for school administrators. "Dixie" was not played during the Rebels' 15-13 victory over Parker High School in the 1980 Alabama 4-A championship game. During his first year as principal in 2006, Cas McWaters, an alumnus and former coach and faculty member, made the decision to prohibit the battle flag from being displayed in the school and to ban all flagpoles from being brought into the stadium. The Flag of Alabama replaced the battle flag on the coat of arms.

In 2015, in the midst of nationwide concern over connections between neo-Confederate symbols and a mass shooting at an African-American church in South Carolina, the Vestavia Hills Board of Education voted to study the possibility of replacing the "Rebel Man" mascot. Branding company Knight Eady was contracted to study alternatives. Their preliminary proposal, presented in April 2016, was to dispense with a mascot altogether and use a new logo with the number "1" highlighted within the "R" in "Rebel", recalling the slogan, "When you play one rebel, you play us all." 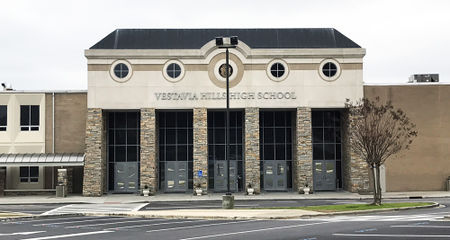 Vestavia's math team has dominated national competition for more than a decade. The team has earned 15 first-place and 2 second-place finishes in their 17 National Mu Alpha Theta Convention competitions. Most recently, Vestavia's math team won first place recognition in the national competition in Fort Collins, Colorado in July, 2006. Other successes include four victories at the regional Furman University Wylie Mathematics Tournament from 1999-2004

Vestavia has also produced a legacy of athletic accomplishment. The baseball team, under late Coach Sammy Dunn, won nine state titles in the highest division of competition, including seven straight from 1994-2000. Dunn's 27-year record at Vestavia was 647-146. The football team. under long-time coach Buddy Anderson, won state championships in 1980 and 1998. The wrestling, soccer, golf and tennis teams have also enjoyed notable successes.

Nine of Vestavia Hills High School's teachers have achieved "National Board Certification" with seven more on track to be certified.

Former Debate Coach, Marilee Dukes was inducted to the National Forensics League Hall of Fame in 2004. She is also in the Tournament of Champions Coaches Hall of Fame. Dukes coached at Alabama’s Vestavia Hills High School for over twenty years and made the program one of the powerhouses of the 1990s. Her students have claimed the championships and top speaker awards at every major national tournament during her tenure, and she has coached debaters to finals at the Tournament of Champions an unprecedented seven times. She is one of ten coaches honored by having a debate round in the Barkley Forum for High Schools at Emory University named for her.

Former Band Director Ted Galloway not only conducted performing groups of consistently high quality, but also brought many legendary jazz musicians, such as Urbie Green, to the school for performances.