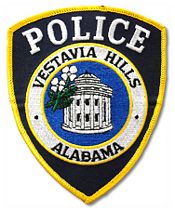 The Vestavia Hills Police Department is the public safety and law enforcement arm of the City of Vestavia Hills. The department is headquartered at Vestavia Hills City Hall at 513 Montgomery Highway. The current acting chief is Dan Rary, who assumed the duties of Butch Wilson after he retired on January 1, 2011.

The department was founded in 1950 and was originally a one-man operation. By 1960 there were four full-time officers commanded by Chief W. O. Haynes.

The department currently has 70 sworn officers, organized under three divisions. The administrative division, commanded by Tim Holcomb, is responsible for records, communications and dispatch, drug prevention programs, school resource officers, and training. The investigations division conducts criminal investigations. The patrol division, commanded by David Whitfield, is divided into east and west precincts, with the east precinct operating from a substation at 3241 Cahaba Heights Road.