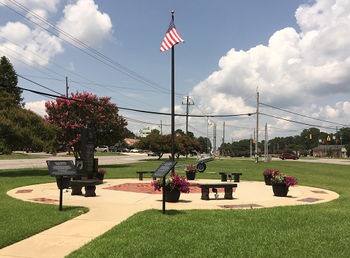 The current park features a cannon and a ship's anchor, various plaques and monuments, and a small parking area. An American flag on a 20-foot pole is the centerpiece of the park. In addition, a large granite marker designed by Richard Bradley of Laser Works of Alabama stands eight feet tall in the park and depicts war scenes and the six seals of the nation's armed forces. Five granite benches representing each major war involving American troops, including the current Mideast conflicts in Iraq and Afghanistan are placed in the middle of the park, as well. Black granite bricks adorn the center of the park and honor those who have served in the military or were killed in the line of duty.

The Gardendale Beautification Commission and the City of Gardendale provide maintenance and upkeep for the park.

Mr. Holly Mitchell from Montgomery drew up the plans for the park in 1965. Originally there were 99 crosses that represented members of the Armed Services who lost their lives in different wars. The flag poles in the park were decorated each year with lights to form the shape of Christmas trees.