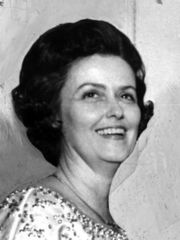 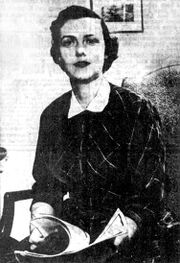 Virginia Ellicott Youmans Simpson (born 1921 in Nashville, Tennessee; died August 30, 1977 in Birmingham) was the wife of real estate executive Joseph Woodward Simpson, and an active supporter of the arts in Birmingham.

Virginia was one of three daughters born to nutritionist John Barlow Youmans, who served in the office of the U.S. Surgeon General and was later dean of Vanderbilt University's medical school, and his wife, the former Lola Dea Williams. She attended Wellesley College and Vanderbilt's school of nursing. She married Simpson, then a U.S. Navy Reserve Lieutenant, at Westminster Presbyterian Church in Nashville, Tennessee on March 25, 1944.

Simpson was elected president of the Junior League of Birmingham in 1954.

In 1960 the couple resided at 2632 Mountain Brook Parkway. Simpson was heavily involved with the Birmingham Symphony Orchestra and Birmingham Museum of Art and was one of the founders and principal supporters of the Birmingham Ballet. She invited Boston Ballet choreographer Alfonso Figueroa to lead a summer seminar, and later invited him to direct the company.

For an anniversary present, Joe Simpson restored the Rosemount plantation house in Greene County in 1958. Simpson chaired the steering committee which explored restoration of the Lyric Theatre in the 1960s.

Later, the Simpsons moved into the former Theodore Swann residence on Redmont Road, where they kept separate bedrooms. On the morning of August 31, 1977 Simpson was found shot to death by a maid in her husband's bed. She had been shot three times by a .38 caliber handgun. Joe Simpson was out of town at the time.

Her son, James II, known as "Popsie", was initially charged with the murder. There was testimony to the effect that he had offered large sums for his mother's death, but those witnesses were discredited in preliminary hearings and the charges were dropped. The style of the murder caused some to conclude that it had been carried out by a professional killer.

Simpson was buried at Elmwood Cemetery.