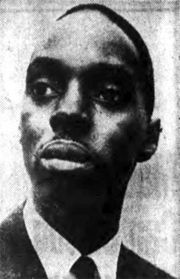 W. L. Williams Jr (born c. 1930 in Birmingham; died September 29, 2013 in Birmingham) was an attorney, noted for filing the landmark case Armstrong v. Birmingham Board of Education which led to the racial integration of Birmingham City Schools.

Williams grew up in Birmingham and graduated from Parker High School. He earned his undergraduate degree from Fisk University in Nashville, Tennessee in 1951 and entered the U.S. Air Force and trained at Lowry Air Force Base in Denver, Colorado and at the University of Denver before being stationed to France and Germany as a finance specialist. He entolled at Miles College in 1955 and earned enough credits to qualify for an Alabama Teacher's Certificate, but then moved to Massachusetts where he completed law school at Boston University in 1959.

Williams passed the Alabama State Bar that year and began his practice in Birmingham. As a young Black attorney in the midst of the Civil Rights Movement, Williams was active in pursuing court rulings to advance the cause of equal protection and challenge the city's segregation laws. He worked on behalf of the NAACP and represented Fred Shuttlesworth and Martin Luther King, Jr. He also helped block plans for a garbage dump in Titusville. He was also active at 6th Avenue Baptist Church and chaired its Social Action Committee.

After the city changed from a City Commission to a Mayor-Council form of government in 1963, Williams and Reverend James Lowell Ware qualified as candidates in the special City Council election. Williams said he wanted, "to offer a brand of urban leadership to Birmingham which will help our city keep pace with her opportunities." He proposed expanding activities for youth to combat delinquency and foster job training and employment and hoped to see African American police officers hired in the city. He did not finish in the top nine of the 76-candidate at large field.

After the election, Williams became a staff attorney for the Equal Employment Opportunity Commission. He returned to Birmingham in 1979 and opened a private practice. He later served as President of the Mason City neighborhood.

Williams died in 2013. He was survived by his wife, Barbara and three children: W. L. Williams III, Yosef & Yashica.