From Bhamwiki
(Redirected from WFO Birmingham)
Jump to: navigation, search

The Weather Forecast Office Birmingham (BMX) is an office of the National Weather Service which provides meteorological and hydrological services to a 39 county area covering north, central, and parts of south Alabama. Their primary mission is the preparation of forecasts and the issuance of statements and warnings to its service area. The forecast office is currently located at the Shelby County Airport.

The first systematic weather observations for Birmingham were initiated in 1882 on behalf of the Signal Service in cooperation with the Louisville & Nashville Railroad and the Great Southern Railroad. This office was manned at different times between 1883 and 1886 by W. J. Danforth, R. N. Abbey, James F. Knight, J. E. Walter, and S. E. Wilson.

In April, 1893 Ben M. Jacobs, a volunteer observer, began recording daily weather observations (except on Sundays). The station was recognized as a "cotton region observer" until 1895 when it became a "Station Agency" for the Weather Bureau. The station office was established in the Walker and Jordan Building at 2011 1st Avenue North with the instruments installed on the roof.

On July 16, 1903 the Weather Bureau established a full-time "First Order" office in Birmingham. Space was leased in the Title Guarantee Building at 21st Street and 3rd Avenue North. The director of the new office was W. A. Mitchell, who personally oversaw the installation of the new equipment. The first official observation was taken on September 1, 1903:

The day began clear and unusually cool - the minimum temperature being 57.3 degrees at 5 am. Cumulus clouds began to form about 9 am. and increased. The afternoon was partly cloudy until 5 pm. after which the cloudiness gradually disappeared and the sky was clear at sunset. Maximum temperature for the day was 79.0 degrees. Fresh north wind. 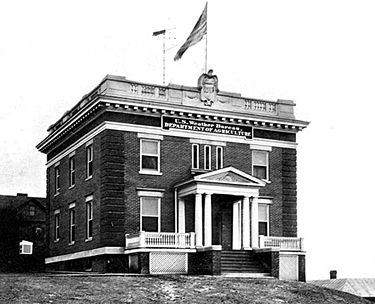 Mitchell was relieved in April 1905 by new "Official in Charge" W. F. Lehman. Two years later a permanent Weather Bureau Building was erected at 1221 13th Street North. The dedicated building in Fountain Heights served the Bureau until 1945 when the office, headed since 1911 by Edgar C. Horton, was merged with the station established during World War II at the Birmingham Municipal Airport and overseen by Charles F. Bradley. Horton retired in 1945, but continued to reside with his family at the Bureau's downtown building until it was sold in 1953 to Fountain Heights Methodist Church.

A new building at the airport, built by the city, was dedicated on October 3, 1965 housing the Federal Aviation Administration's Flight Service Station and General Aviation District Office as well as the Weather Bureau. Bradley, who had succeeded Horten, remained the Meteorologist-in-Charge until 1969.

In 1969 the Birmingham Weather Bureau Office was designated as the forecast office for Alabama and Northwest Florida. Robert M. Ferry took over for Bradley, who became second-in-charge. Two years later the Forecast Office split from the Observation Station, moving to southwest corner of the 4th floor of the 6-story West Oxmoor Tower on West Oxmoor Road. The agency was renamed the National Weather Service (NWS) during that period.

Ferry retired in 1980 and was succeeded by Frank Makosky in 1981. Gary Petti took over the office in 1988. In the early 1990s the NWS began implementing WSR-88D Doppler-capable radar sites. The site chosen for Birmingham was in Calera, in Shelby County, 25 miles south-southeast of downtown. In 1992 the NWS signed a 50-year lease with the Shelby County Commission for a new station site at the Shelby County Airport, across the interstate from the radar site. The new building was put into service in November, 1993.

Petti was succeeded, after a brief interim, by Ken Graham in 2001. When Graham was promoted to Southern Region Headquarters in 2005, the position was filled with current Meteorologist-in-Charge Jim Stefkovich.

On the morning of Sunday, September 1, 2019 as Hurricane Dorian President Trump issued a warning from his Twitter account saying, "In addition to Florida - South Carolina, North Carolina, Georgia, and Alabama, will most likely be hit (much) harder than anticipated. Looking like one of the largest hurricanes ever. Already category 5. BE CAREFUL! GOD BLESS EVERYONE!" Because the storm's forecast path no longer included any part of Alabama, NWS Birmingham responded 20 minutes later with a tweet saying that, "Alabama will NOT see any impacts from #Dorian. We repeat, no impacts from Hurricane #Dorian will be felt across Alabama. The system will remain too far east. #alwx."

The president then began defending his warning, resulting in a minor controversy, which was exacerbated when, during an Oval Office briefing on the hurricane, Trump displayed a print of an early NOAA forecast map which he had altered by hand to include Alabama. An unsigned statement from the National Association was sent out on September 6 advising that, "The Birmingham National Weather Service’s Sunday morning tweet spoke in absolute terms that were inconsistent with probabilities from the best forecast products available at the time." That statement, in turn, prompted three separate investigations, from the House Science Committee, NOAA's chief scientist, and the Commerce Department's inspector general. The House Science Committee interviewed Neil Jacobs, acting head of NOAA. He told them that Secretary of Commerce Wilbur Ross' chief of staff, Michael Walsh, had instructed him at 6:00 AM that a statement needed to be issued rebuking NWS Birmingham. He said that the wording of the unsigned statement was worked out between political appointees, and that his objections were ignored.

The Birmingham Forecast Office currently makes use of four radar sites, the Birmingham site which it maintains, the Montgomery radar in Macon County, the Huntsville radar in Jackson County, and the Columbus, Mississippi radar.

Other instruments operated from the site include an Automated Surface Observing System (ASOS), an inflation building where weather balloons are prepared for release, and a Console Replacement System (CRS) which automates the delivery of forecasts and warnings to transmitters controlled by the NWS.

The office's AFOS computer system, which dated back to the late 1960s was replaced in 1999 by the newer AWIPS system which allows forecasters to integrate satellite, radar and model data. In 2000 an instant messaging platform was launched to allow for closer communication with local media. In 2003 an Interactive Forecast Preparation System (IFPS) was implemented, enhancing the graphical component of creating and depicting forecasts while preserving the systematic recording of data automatically. In 2004 the Advanced Hydrologic Prediction Service (AHPS) allowed the office to provide better estimate of river levels and flows within its service area. Also in 2004 the staff of the Weather Forecast Office Birmingham created a database of every recorded tornado in the state of Alabama since 1819. That database is now accessible through the "Alabama Weather Page", a website which is jointly maintained by the NWS Birmingham, the Alabama Office of State Climatology, and the University of Alabama in Huntsville.