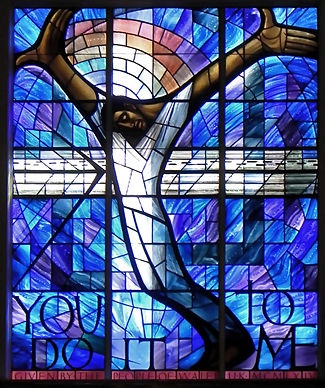 The Wales Window for Alabama is a stained-glass window at 16th Street Baptist Church, depicting a Black figure, arms outstretched and head lowered as if crucified, with the words "You do it to Me".

The window is the work of John Petts of Llansteffan, Carmarthenshire, Wales. He heard on the radio about the 1963 bombing which killed four girls and left the church's stained glass in shards. In a later interview he recalled his reaction, "Naturally as a father I was horrified by the death of the children. As a craftsman... I was horrified at the smashing of all those windows, and I thought to myself: my word, what can we do about this?"1.

Petts was moved to create a new window, expressing both sorrow and hope for the church. At his wife, Kusha's suggestion, he contacted editor David Cole of Cardiff's The Western Mail about his idea for a gift. They launched a front-page appeal for small donations, no greater than half a crown (on the premise that if one patron underwrote the majority of the expense, the gesture would lose some significance). The campaign was popular and the goal of £500 was quickly surpassed. The campaign was closed with a balance of £900. Petts set off to visit the congregation to take measurements and discuss the project with church leaders.

Petts hit upon the words of Christ in Matthew 25:40, "Truly, I say to you, as you did it to one of the least of these my brothers, you did it to me," as evocative of the compassion and faith of the Christian community. The crucified figure, a black Christ, is superimposed over an abstract cross of white and light colored glass against a blue field with a circle inscribed around it. As interpreted by Petts, the figure's right hand, which is pushing against the frame, suggests the struggle against injustice, while its left hand is open, offering forgiveness. A rainbow, representing human diversity and God's promise, crowns the figure's head. Some have interpreted the figure's pose as bent from the blast of a water cannon, recalling the demonstrations the previous Spring which were infamously met with police dogs and fire hoses. At the bottom edge of the window is the dedication, "Given by the people of Wales, UK, MCMLXIV".

Complete in 1964, the window was installed prior to the reopening of the church in 1965. The donation of the window was a tangible symbol to the congregation at 16th Street Baptist that people around the world cared about their suffering and sacrifice, at a time when it was hard to find much compassion expressed among white people in the South. Jim Lowe has spoken about the importance of a physical sign that, "hatred against me and my people was not as widespread as I had been led to believe,"1. and pastor John Cross hopes that, "it might serve as a constant reminder that there are persons in the world whose hearts are filled with love and brotherly kindness."2.

The window is featured in tours of the church and is displayed on the cover of Christopher Hamlin's Behind the Stained Glass: A History of Sixteenth Street Baptist Church. A detail of the window is also on the cover of Petric Smith's Long Time Coming: An Insider's Story of the Birmingham Church Bombing that Rocked the World.