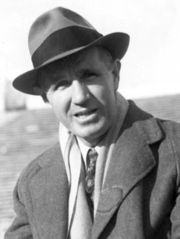 William Wallace Wade (born June 15, 1892 in Trenton, Tennessee; died October 7, 1986 in Durham, North Carolina) was an athlete and athletic coach. He served as the head football coach for the University of Alabama Crimson Tide football team from 1923 to 1930 and for the Duke University Blue Devils from 1931 to 1950, compiling a career record of 171–49–10. After leaving coaching, Wade served as commissioner of the Southern Conference.

Wade began playing football for coach Tuck Faucett at Trenton's Peabody High School and continued to play as a guard while at Brown University from 1914 to 1916. In 1918 he took his first coaching job at the Fitzgerald and Clarke Military School in Tullahoma, Tennessee. He went 16–3, winning a state prep-school championship in 1920.

In 1921 Wade was hired as a baseball and basketball coach, and assistant football coach at Vanderbilt University in Nashville, Tennessee. His basketball teams went 24-16 during his two seasons. The Commodores football team went 15-0-2 and shared Southern Conference titles both years he was there.

From Vanderbilt, Wade was hired as the head football and baseball coach at the University of Alabama in 1924. He turned over his baseball coaching duties after the 1927 season, having compiled an overall coaching record of 87-45-2 and Vanderbilt and Alabama. He continued to coach football, and won national championships with the 1925, 1926 and 1930 teams. Each of those seasons was crowned by a victory in the Rose Bowl in Pasadena, California.

In 1931 Wade left Alabama to become head football coach for Duke University in Durham, North Carolina. He was known to have had many disagreements with Alabama president George Denny and was offered an enormous salary at Duke. Wade explained the move late in life by saying that his philosophy regarding the trade-offs between academics and sports was more closely aligned with Duke's, and that he enjoyed more freedom working for a private college. He continued to be successful as a head coach. His 1938 team went into the Rose Bowl undefeated, losing to the University of Southern California, 7-3. He returned to the Rose Bowl in 1942, and actually hosted the game in Durham following the attack on Pearl Harbor. After the game he enlisted in the army and coached college all-star teams in fundraising games. He was eventually sent to Europe as a lieutenant colonel. Eddie Cameron filled in as coach until Wade returned in 1946. He retired as coach in 1950 with his Duke teams posting a 110-36-7 record. Wade won a total of ten Southern Conference football titles, four with Alabama and six with Duke. He coached in five Rose Bowls.

After retiring from coaching, Wade served as the commissioner of the Southern Conference from 1951 to 1960. He was inducted into the College Football Hall of Fame as a coach in 1955 and into the Alabama Sports Hall of Fame in 1970. Duke's football stadium was named "Wallace Wade Stadium" in his honor in 1967. Wade died in 1986 and was buried in Maplewood Cemetery in Durham.

A bronze statue of Wade was erected outside the University of Alabama's Bryant-Denny Stadium in 2006.