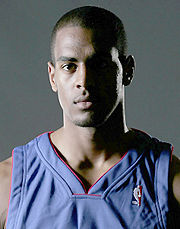 Walter L. Sharpe III (born July 18, 1986 in Huntsville) is a basketball forward who graduated from Parker High School. He played 12 games for the 2007-2008 UAB Blazers and played in the National Basketball Association briefly from 2008 to 2009.

Sharpe is the son of Walter and Alicia Sharpe. He was born in Huntsville but moved to Birmingham before high school. He was the three-year starter for the Parker Thundering Herd. He was named to the all-state, all-metro and all-city teams in his junior and senior years and helped the team to a 63-8 record over those two seasons. As a senior he averaged 19 points, 10 rebounds and 5 blocks per game and was a finalist for Alabama's 6A player of the year. His career high was 35 points against Wenonah High School.

After his senior season, Sharpe was rated as the 9th best power forward and 44th overall in the class of 2004 by Rivals.com. He was heavily recruited by Mark Gottfried for the Alabama Crimson Tide basketball program and was also courted by UAB and Georgia. He surprised many analysts, however, by choosing to sign with Rick Stansbury's Mississippi State Bulldogs. At the time, some questioned the involvement of Parker coach Maurice Ford in the recruitment of his star player.

As a freshman player at Mississippi State, Sharpe averaged 9.3 points and 5.0 rebounds per game in limited action. His highest scoring game was a 16-point outing against the Akron Zips. He was suspended from the team more than once for missing team meetings, practices and a flight to Anaheim, California. He was declared academically ineligible for the fall semester of his sophomore season. He managed to play in six games before he missed another practice and was dismissed from the team. He was accepted as a transfer to UAB in 2006.

Sharpe sat out the 2006-2007 season after transferring. In April 2006 he was shot in the abdomen after gunfire erupted at the Loveman Village Housing Project. He fled the scene and was picked up by police resting outside the gates of the Arlington Antebellum Home on Cotton Avenue, a half-mile away. He initially denied being wounded, but was taken to UAB Hospital for treatment.

While with the Blazers the 6-9, 245 pound forward averaged 14.2 points and 6.8 rebounds per game in 12 starts. His best statistical performance was a 26-point, 17-rebound outing in a home loss to the Rhode Island Rams on November 18. He also had three assists, a steal and two blocks in the game. He scored 16 points in 28 minutes in a road win against the Kentucky Wildcats on December 15, but was declared academically ineligible to remain with the team after the winter break.

In late August 2007 Sharpe was one of five UAB players arrested for disorderly conduct by Birmingham Police after a fight at Club Red on Highland Avenue. All players were put on a strict curfew, which included no nightclub visits, by coach Mike Davis following the arrests. Davis later said that the arrests "really brought us together as a team."

Later that year, team coaches suspected that some of Sharpe's academic and conduct problems may have been related to a sleep disorder. He was tested and diagnosed in the fall with narcolepsy and began a treatment program.

Instead of returning to the Blazers in 2008, Sharpe declared himself eligible for the NBA draft and worked out for several teams. Pistons president Joe Dumars was very impressed and talked to numerous people in Alabama about Sharpe's character and maturity before deciding to make a trade to secure his rights from the Seattle Supersonics, who picked him 32nd overall in the 2008 draft.

Sharpe played sparingly in eight games with Detroit. The Pistons traded Sharpe to Denver in 2009. Two weeks later he was traded to the Milwaukee Bucks. The Bucks released him on October 26. He went on to play for the NBA Development League's Fort Wayne Mad Ants for the 2009 season, and has since played for the Idaho Stampede, the Dakota Wizards, and the New Mexico Thunderbirds (now the Canton Charge).