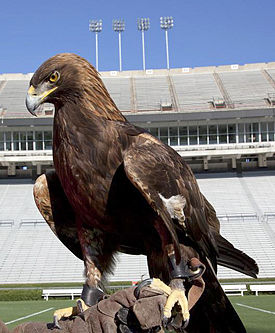 The War Eagle serves as a symbol and mascot of Auburn University, a living embodiment of the school battle cry of "War Eagle," and the title of the college's fight song.

The most popular origin tale for the "War Eagle" cry centers on an unnamed Confederate veteran and his pet eagle. According to that story, an Auburn alumnus had found the eagle on a battlefield during the Civil War, named it "Anvre", and kept it as a pet for almost 30 years. The veteran joined the Auburn faculty after the war, and he and his pet attended the first football game against the University of Georgia at Atlanta's Piedmont Park in 1892. At a crucial point in the game, the eagle broke free and began circling the playing field. As the eagle soared, Auburn began a steady march toward the Georgia end zone for a thrilling victory. Elated at their team's play and taking the bird's presence as an omen of success, Auburn students and fans began to yell "War Eagle" to spur on their team. At the game's end, the eagle took a sudden dive, crashed into the ground, and died. The battle cry lived on to become a symbol of the proud Auburn spirit.

This legend was originally published in 1960 in the Auburn Plainsman and was conceived by then-editor Jim Phillips. Though apocryphal, the tale has come to be regarded as the beginning of the association of "War Eagle" with Auburn.

The 1914 contest with the Carlisle Indian School provides another story. Supposedly the toughest player on the Indians' team was a tackle named Bald Eagle. Trying to tire the big man, Auburn began to run play after play at his position. Without even huddling, the Auburn quarterback would yell "Bald Eagle," letting the rest of the team know that the play would be run at the imposing defensive man. Spectators, however, thought the quarterback was saying "War Eagle," and in unison, they began to chant the resounding cry.

The rarest version of the origin of the "War Eagle" cry may be the most likely to be true. In this tale, students gathered in front of Langdon Hall for a pep rally before the 1913 game against Georgia. Cheerleader Gus Graydon told the crowd, "If we are going to win this game, we'll have to get out there and fight, because this means war." During the frenzy, another student, E. T. Enslen, dressed in his military uniform, noticed that something had fallen from his hat. Bending down, he saw it was the metal emblem of an eagle that had been loosened while he cheered. Someone asked him what he had found, and Enslen loudly replied, "It's a War Eagle!" History was made, and the new cry echoed throughout the stadium the next day as Auburn battled Georgia.

There are generally considered to have been seven "War Eagles" in the team's history.

The first "War Eagle" was the bird in whichever original story is accepted.

Auburn's second eagle, War Eagle II, is well documented. In November 1930 a golden eagle swooped down on a flock of turkeys in the community of Bee Hive, southwest of Auburn, where it became entangled in a mass of pea vines. Fourteen individuals and businesses scraped together $10 to purchase the eagle from the farmer who owned the pea patch. Cheerleaders DeWit Stier and Harry "Happy" Davis (later executive secretary of the Auburn Alumni Association), helped care for the new bird. It was put in a strong wire cage and taken to the Auburn football game against the University of South Carolina in Columbus, Georgia on Thanksgiving Day.

Auburn, having not won a Southern Conference game in four seasons, was anticipated to lose. However, the Plainsman as they were then known surprised everyone with a 25-7 victory over the Gamecocks. The student body could only conclude that the eagle's presence on the sidelines was responsible for the victory that day. The eagle was kept in a cage behind Alumni Hall (which would later be renamed Ingram Hall) and cared for by members of the "A" Club.

No one is certain what became of the bird. Some say it died or was carried away by students of a rival school. Others say it was given to a zoo or traveling carnival due to the high cost of upkeep. There is even a rumor that it was stuffed and put in the John Bell Lovelace Athletic Museum. Originally known simply as "War Eagle" this bird was retroactively named "War Eagle II" with the arrival of War Eagle III.

Auburn's third eagle arrived in Auburn in November 1960 after being captured by a cotton farmer in Curry Station, caught between two rows of cotton. The eagle was sent to Auburn by the Talladega County agent Dell Hill along with a load of turkeys. It was accepted by the Delta chapter of Alpha Phi Omega, where the brothers built a small wire cage and began feeding it live chickens.

Jon Bowden, an architecture student who had previously worked with hawks in Colorado and Missouri, volunteered to serve at the bird's trainer. Formally named War Eagle III, Jon nicknamed the bird "Tiger." In April 1961, Jon and Tiger made their first appearance as trainer and mascot on the baseball diamond. Auburn was playing Georgia Tech and was trailing 10-13 in the eighth inning, but rallied in the ninth and scored 4 runs to win the game.

The students were receptive to the new mascot. Bowden turned Tiger's care over to fellow AΦΩ Elwyn Hamer, and, with the help of donations from students, planned a larger aviary to house War Eagle III. In 1964, on the morning of the football game against Tennessee at Legion Field, War Eagle III was spotted by Hamer sitting on the ground next to his perch. He had sprung the clip on his leash and escaped. He was found shot to death in a nearby backyard. The property owner claimed it had attacked his children.

Birmingham's Downtown Action Committee found another golden eagle in the Jackson, Mississippi zoo and presented it to the Auburn student body in October 1964. This became War Eagle IV, also called "Tiger." She lived in a large aviary—until it was torn down in 2003 it remained the second largest single-bird enclosure in the country—that had been funded and constructed by AΦΩ and named for Hamer, who had been killed in a plane crash in December 1965.

Throughout the years, the fraternity provided care and training for the mascot. On the morning of the 1980 Iron Bowl at Legion Field, she was found dead of natural causes at age 22, having served as Auburn's mascot for 16 years. A marker in memory of War Eagle IV is located on the Auburn University campus near the site of the Aviary.

Through the efforts of War Eagle IV's trainers and with the financial support of the Birmingham Downtown Action Committee, an immature golden eagle was located soon after the death of War Eagle IV and brought to Auburn from Wyoming. The bird arrived in Auburn on March 3, 1981 and was taken to the Veterinary School where she was kept for a short period in order to be examined for any signs of shock from travel. She was then transferred to a small cage until the annual "A Day" football game when she was presented to the University by the Birmingham Downtown Action Committee on May 9, 1981.

The bird was under the stewardship of the U.S. Government under the provisions of the Endangered Species Act and was on loan to the Auburn University Veterinary School. She was officially named War Eagle V, and nicknamed "Tiger" as was tradition. She was approximately two years old at her arrival and was very active on campus. She attended many university functions, Alumni meetings, schools, hospitals, the 1985 Boy Scouts of America National Jamboree, and the 1986 Order of the Arrow National Conference.

On September 4, 1986, Tiger died of a ruptured spleen at the age of 8½. Tiger was taken to the veterinary school the night before by her trainer, Jim McAlarney, who noticed that she was not behaving normally. Jim spent the night at the school while veterinarians made a futile effort to save the bird's life.

The Eagle trainers began working soon after the death of War Eagle V to find a new golden eagle. The Auburn University Alumni Association and many Auburn alumni contributed to the effort and a new eagle, a 6-year old soon nicknamed Tiger, was located at the Tennessee Valley Authority Raptor Rehabilitation Facility in Land-Between-The-Lakes, Kentucky.

The eagle originally came from St Louis, Missouri, where she had been seized by Federal agents as part of an illegal breeding operation. She remained under the stewardship of the U.S. government under the Endangered Species Act, and was loaned to the Auburn University College of Veterinary Medicine. Tiger arrived in Auburn on October 8, 1986. Auburn alumnus Thomas Chamberlain paid for her travel expenses.

At first Tiger was cared for by the brothers of Alpha Phi Omega. In 2000, day-to-day care was turned over to the Southeastern Raptor Rehabilitation Center which uses the university's eagles in outreach and wildlife education programs. She was moved to the new rehabilitation center from the Hamer Aviary.

On February 8, 2002, Tiger flew before the entire world as part of the opening ceremonies of the 2002 Olympic Winter Games in Salt Lake City, Utah. She was featured the next day on NBC's Today Show.

On November 11, 2006, War Eagle VI officially retired in a pregame ceremony before a game against the Georgia Bulldogs. During halftime of the same game her successor, Nova, was named War Eagle VII. Tiger flew once more as War Eagle VI, a 27-0 victory over Arkansas State. Her career "record" as Auburn's football mascot was 174-69-4, including two undefeated Auburn seasons, four Southeastern Conference titles, and six SEC Western Division crowns. Tiger was inducted into the Alabama Animal Hall of Fame in 2005.

Tiger underwent cataract surgery on her right eye in 2012, but the procedure was unsuccessful and led to a detached retina. She was operated on again in June 2014 to remove cataracts from her remaining eye, but died a day later, on June 18. At 34 years old she was believed to have been one of the oldest golden eagles in captivity.

Nova, Auburn's eleven-year-old Golden Eagle, was officially named War Eagle VII on November 11, 2006. He was born in the Montogomery Zoo in 1999 and moved to Auburn at only six months of age. Prior to being named War Eagle VII, Nova had already made her debut in the game against Kentucky in 2004 and participated in other pre-game flights and conservation exhibits throughout the southeast.