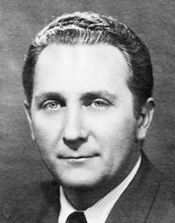 Walter Wharton "Ward" McIntyre, Jr (born 1930 in Birmingham; died July 20, 2007 in Birmingham) was a veteran broadcaster best remembered for playing Birmingham's "Bozo the Clown" from 1962 to 1968.

McIntyre grew up in Birmingham and graduated in 1948 from Ramsay High School. He went on to graduate from Birmingham-Southern College (1953) before joining the US Army as a broadcaster during the Korean War. He developed and announced a 30-minute radio show from Fort Dix, New Jersey. He married the former Anne Gordon Stamps in 1954.

Back in Birmingham, McIntyre worked as a radio DJ on WEZB-AM and WSGN-AM. In August 1962 he came to WBRC-6, and replaced Bart Darby as news reporter, sports announcer, and host of Bozo the Clown. He played Bozo for six years, with a daily half-hour show and endless personal appearances, until the series ended on January 5, 1968. For a few months after the end of the Bozo series, McIntyre became cowboy "Quick Fire McIntyre" to introduce the "Huck and Yogi" series of Hanna-Barbara cartoons. He has also donned a hillbilly costume to introduce country music programs as "Sad Sam" and a ghoulish mad scientist outfit to introduce Friday night horror movies as "Bela LaGhosty". His television career ended in May 1968 and McIntyre returned to radio broadcasting, happy to put his Bozo years behind him.

He remained in broadcasting through the early 1990s, retiring from WBHM-FM as a writer and producer.

McIntyre was an active member of Canterbury United Methodist Church in Mountain Brook. He was a member of the church council and the drama, advertising and contemporary committees. He read scripture during contemporary services until his death, following a long illness, in 2007. His wife Anne preceded him in death. He was survived by his children Gordon, Catherine and Dale and five granddaughters.