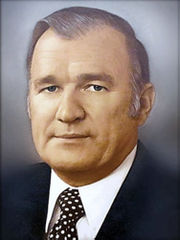 Teague was the son of Levi Wade and Floy Irene McKelvey Teague. He graduated from Cullman High School and served in the U.S. Army Air Corps in 1946-1947. Afterward he enrolled at Auburn University, where he completed bachelor's and master's degrees in education. He married the former Josephine Jones on June 5, 1949.

Teague began his teaching careers a teacher and coach at Heard High School in Franklin, Georgia. In 1955 he was hired as principal of Marion County Elementary and High School in Buena Vista, Georgia. Two years later he was named principal of Jonesboro Senior High School, then moved to Southwest DeKalb High School in Decatur, Georgia in 1958. While there he returned to Auburn for his doctorate, which he completed in 1962.

From 1963 to 1969 Teague served as a coordinator of field services, director of correspondence study and associate professor of educational administration at Auburn. He was hired as superintendent of Auburn City Schools in 1969 and remained there until his appointment to statewide office by the Alabama State Board of Education.

As state superintendent he was in charge of all public K-12 schools and, for a time, two-year colleges. He was frequently at odds with the powerful Alabama Education Association and its president, Paul Hubbert. He oversaw the drafting of the 1984 blueprint for state schools entitled "A Plan for Excellence: Alabama’s Public Schools."

He also served on the Auburn University Board of Trustees. He was inducted into the Alabama Educational Leadership Hall of Fame at Troy State University in 1985. He retired on March 31, 1995 after twenty years in office. The State Department of Education's main conference room in Montgomery was named in his honor.

Teague died in 2015. He was survived by his wife, Josephine, two children, and seven grandchildren.