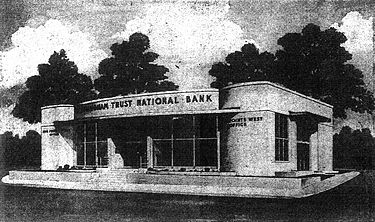 1951 rendering of the bank branch

The original banking office was constructed for Birmingham Trust National Bank in 1951, and was the third "neighborhood branch" to be opened, following those in East Lake and Mountain Brook. The modern building sported curving exterior walls and large planting beds. Two drive-through teller windows were located on the rear of the building.

A later addition, with plate glass windows, deeply overhung by a brick and concrete parapet, extended the bank office to Avenue V. The number of drive-through lanes has been increased to five.

In 1981 BTNB was renamed "SouthTrust Bank". In 2005 SouthTrust was taken over by Charlotte, North Carolina-based Wachovia Bank. Wells Fargo purchased Wachovia in 2009.