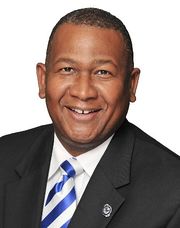 Major is the older brother of former State Representative Eric Major. He enlisted in the U.S. Marine Corps Reserve in 1983 and served with the 4th Battalion, 14th Marines and as part of the 4th Force Support Squadron. He attained the rank of Marine Sergeant. He joined the Sheriff's Department in 1989.

Major has also worked with the Bureau of International Narcotics and Law Enforcement Affairs as a mentor to the Afghan National Police.

He earned a bachelor of science in criminal justice at UAB in 2002 and a juris doctorate from Birmingham School of Law in 2006. He has also taught criminal justice and paralegal classes for ITT Technical Institute and undergone specialist training at the FBI National Academy.

Major has been active in political campaigns for the Jefferson County Citizens Coalition, as well as in the voter education efforts of the non-profit Jefferson County Citizen's Coalition. He ran unsuccessfully in the 2006 Democratic primary to represent Alabama Senate District 19. In the 2017 Birmingham municipal election he qualified for the vacant Birmingham City Council Birmingham City Council District 9 seat left when Marcus Lundy announced he would not seek re-election.

Major and his wife Tawanna have two children and three grandchildren. He volunteers with the parking ministry at Faith Chapel Christian Center.