This article is about the former mining camp. For the 1916 pageant, see The Magic Word. 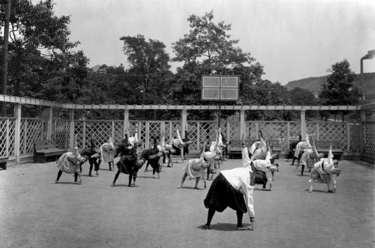 Recreation class for white students in Wenonah, May 5, 1917

Wenonah (formerly Fossil) is a community in western Birmingham that began as a series of Red Mountain iron ore mining camps for employees of the Tennessee Coal and Iron Company (TCI), now United States Steel (USS). The camps were designated as: Wenonah Camp #6, #7, #8, #9, and #10. Mining Camps #11, #12, #13, #14 and #15 were in Ishkooda. The oldest was Wenonah Camp #6 as listed on the 1916 Birmingham Mining District maps. Number 6 was next to the Woodward Iron Company's Camp #2 on its western boundary and was the location of the water reservoir that in about 1947 was replaced with a covered water tank, now owned by the Bessemer Water Works. The reservoir/tank is located in the Lipscomb area of Jefferson County.

Mining Camp #7 (1880-1938), located on the southwest boundary of Browns Station, was also the site of the plant that processed the iron ore before being transported via High Ore Line Railroad connection from Red Mountain to the Fairfield Works. In 1880, before TCI became the owner, the #7 mine was operated by T.T. Hillman and Henry DeBardeleben's Alice Furnace Company. The #7 mine in those days was called the Alice Mine and also sometimes referred to as the Hillman Mine.

In 1914, TCI began ongoing facilities and programs to improve lives of employees with schools, medical dispensaries, training programs, and housing. The company produced an outdoor pageant, called The Magic Word, to introduce the new name of "Wenonah" in November 1916. The name was chosen by TCI's social science director Marion Whidden as a complement to the company's Ishkooda and Muscoda camps. All three names appear in Henry Wadsworth Longfellow's epic poem "The Song of Hiawatha"1.. 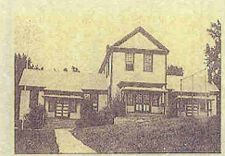 Wenonah Camp #8 (1887-1938), also called "New Hill", was located just south of Hillman Station on the north side of Red Mountain in Birmingham's present East Brownville neighborhood. It was the site of the company commissary, doctor’s office and other administrative offices.

Wenonah Camp #9 (1887- ) was south of Grasselli Heights on the north side of Red Mountain. It was the location of the Wenonah School, built in 1917 as part of the company's welfare program. The #9 mine was opened in 1897 under contract to the Smith Mining Company and then was known as the Klondike mine.

Wenonah Camp #10 (1880-1952), was located adjacent to West Goldwire and south of the current Wenonah High School. It is now known as Tarpley City. The #10 mine has been designated as the future site of the Red Mountain Park Museum. Beginning in 2009, In conjunction with UAB and Samford, oral histories of mine employees and their families started being recorded. It can be viewed at this website [1].

In 1962, Red Mountain ore mines closed in the Birmingham District, ending over 100 years of iron ore mining in the Red Mountain/Oxmoor Valley area, as Venezuelan ores began to be used.