From Bhamwiki
(Redirected from West Lake)
Jump to: navigation, search 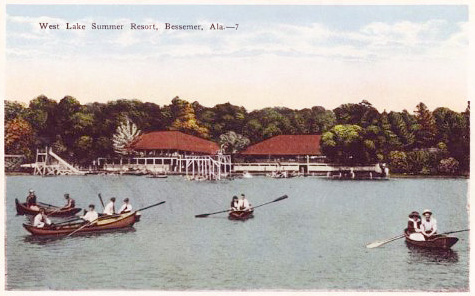 West Lake Park was developed in the 1890s as reservoir and recreational attraction on Hall's Creek, fed by Moore's Spring and Glen Spring between the Louisville & Nashville Railroad and the Bessemer Super Highway just west of Bessemer.

By comparison to East Lake, fed by Roebuck Springs, the water and West Lake was warmer and the sand-covered beach more expansive. The park offered swimming, boating, and fishing on the lake, and skating, dancing and bowling in the park building. Beginning in 1919 the park hosted an annual "Bathing Revue" of new bathing costumes furnished by Burger-Phillips. The dance pavilion featured music by the Jack Linx & His Society Serenaders.

In 1934 the Civil Works Administration oversaw the cleaning and draining of 40 acres of swamp land in the vicinity of West Lake and the digging of 4,405 feet of drainage ditches.

West Lake Park was managed by John Ryan until 1935. In the 1940s, special bus shuttles brought visitors to the park from downtown Bessemer. In 1949 W. T. Thompson offered a streamline-style miniature train with a "practically new" V-8 Ford motor and three coaches along with 870 feet of rail, located at the park, for sale.

The lake was filled in for construction of West Lake Mall in 1969.