From Bhamwiki
(Redirected from West Park)
Jump to: navigation, search

Kelly Ingram Park is a four acre park located on Block 44 in between 16th and 17th Streets and 5th and 6th Avenue North in the Birmingham's Civil Rights District. The park, just outside the doors of the Sixteenth Street Baptist Church, served as a central staging ground for large-scale demonstrations during the Civil Rights movement of the 1960s. 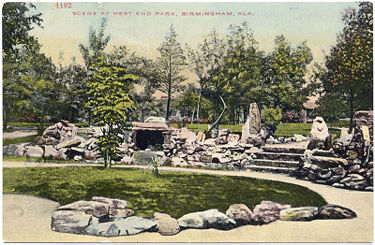 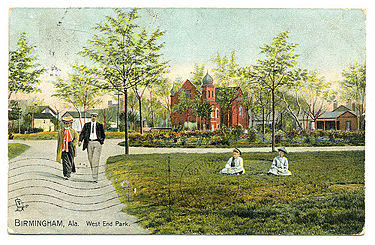 View of the park, with Temple Emanu-El in the background, c. 1906

First known as West Park, the block was set aside as a park by the Elyton Land Company as part of the original Plat of Birmingham created by William Barker. Along with two other park blocks (Linn Park (Central Park) and Marconi Park (East Park), it was sold to the City of Birmingham on February 21, 1883 for a nominal price of $10.

In the early days the park featured a stone grotto. 16th Street Baptist Church, Henley School, and Temple Emanu-El, at 1631 5th Avenue North were prominent landmarks surrounding the park at the turn of the century. West Park was sometimes called West End Park', though there is some confusion with another park, an athletic field where 7th Street North reached the railroad tracks west of Alice Furnace, that was also commonly referred to as Slag Pile Field.

West Park was renamed in 1932 for local firefighter Osmond Kelly Ingram, who was the first sailor in the United States Navy to be killed in World War I. A monument to Ingram, consisting of a massive boulder with attached bronze plaques, was erected in the northwest corner of the park.

Reverends Martin Luther King Jr. and Fred Shuttlesworth directed the organized boycotts and protests of 1963 which centered on Kelly Ingram Park. It was here, during the first week of May 1963 that Birmingham police and firemen, under orders from Public Safety Commissioner Bull Connor, confronted demonstrators, many of them children, first with mass arrests and then with police dogs and firehoses. Images from those confrontations, broadcast nationwide, spurred a public outcry which turned the nation's attention to the struggle for racial equality and helped insure the passage of Civil Rights laws and bring an end to public segregation.

In 1990, during the early stages of planning for the Birmingham Civil Rights Institute, Mayor Richard Arrington attended a Mayors' Institute on City Design session hosted by Tulane University in New Orleans, Louisiana, where he presented the project to professional planners. The group, led by Tulane Regional Urban Design Center director Grover Mouton, quickly identified the potential of using the open space of Kelly Ingram Park as a major component of a larger Civil Rights District. The concept evolved into redesigning the park as "A Place of Revolution and Reconciliation," and using art to enhance the interpretive program of the Institute. Grover Harrison Grover prepared the landscape design.

Opened in 1992, the park is the setting for an ever-growing number of memorial sculptures related to the Civil Rights Movement. Besides a central fountain and a large commemorative statue of Martin Luther King, Jr, there are three powerfully charged installations by artist James Drake which flank a circular "Freedom Walk" and bring the visitor inside the portrayals of terror and sorrow of the 1963 confrontations. Ronald McDowell's "The Foot Soldier" is also located on the circular path on the south side of the park. Through the efforts of businessman A. G. Gaston, monuments honoring public health worker Pauline Fletcher and educator Carrie Tuggle were installed in the park in 1979. Additional markers honor Ruth Jackson, attorney Arthur Shores and Julius Ellsberry.

Currently the park hosts several local family festivals and cultural and entertainment events throughout the year. The Civil Rights Institute provides audio-tour guides for the park which feature remembrances by many of the figures directly involved in the confrontations. Urban Impact, Inc. also provides guided tours by appointment.

In June 2008 two homeless men, Juan Perkins and Reginald Sanders, were arrested for "impersonating public servants" by trying to charge visitors for tours of the park. In November 2009 demonstrators with the "Tea Party Express II" caused controversy by selecting the park as the scene of their protests against the legitimacy of the Obama administration and against congressional plans to expand public healthcare coverage.

In 2010 BCRI board member Joel Rotenstreich led a drive to plant an Anne Frank tree in Kelly Ingram Park. Another group raised funds for a Four Spirits memorial to the girls killed in the 1963 church bombing. That work, by Elizabeth MacQueen, was dedicated on September 15, 2013, the 50th anniversary of the tragedy.

In part because of its role in the Civil Rights Movement, Kelly Ingram Park has been chosen as the site of many other public demonstrations and rallies, including the 2015 Restoring Unity Rally and the 2017 Women's March.