This article is about the entrepreneur running for Jefferson County Commission. For others with similar names, see William Barnes. 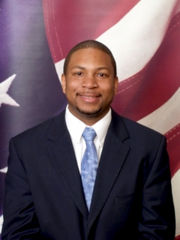 William A. Barnes III (born January 14, 1978 in Birmingham) is the owner of XPC, Inc, a technology firm.

Barnes grew up in north central Birmingham. He studied computer engineering at the University of Alabama, earning his bachelor's degree in 2000 from ITT Technical Institute. After college he returned to the city as a youth advisor. He taught computer skills at ITT Technical Institute and later became an instructor for SouthTrust Bank before became owner of XPC.

In the community, Barnes founded the Hooper City Homeowners Association and was elected president of the Hooper City neighborhood association. He also serves on the board of the African American Civic Empowerment Fund and chairs the public relations committee of the Birmingham Urban League Urban Professionals group.

Barnes and his wife Christe have two children, William and Aaliyah.

Barnes first ran for City Council in the 2005 election, finishing fourth in District 9 behind Roderick Royal, Leroy Bandy, and David Merrida. Since then he has been elected president of the Jefferson County Chapter of the Young Democrats of America. He ran again in the 2009 Birmingham City Council election. In his 2009 campaign, Barnes called for more economic development, early childhood education, better schools, crime prevention, and city-wide broadband internet access. He finished third, again behind Roderick Royal and Leroy Bandy.

In 2010 he became one of 14 candidates to qualify for a special election to fill the Jefferson County Commission District 1 seat left vacant when William Bell was sworn in as Mayor of Birmingham.