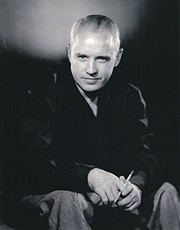 Huie graduated from Morgan County High School and was Phi Beta Kappa at the University of Alabama, graduating in 1930 and taking a job at the Birmingham Post, covering labor troubles and other local news until 1936. In 1934 he married his grammar school sweetheart, Ruth Puckett, at her parents' home in Hartselle.

On January 1, 1941 Collier's Weekly published a piece by Huie entitled "How to Keep Football Stars in College" that quoted an Alabama Crimson Tide football booster as saying, "We who have recruited Alabama's players know who our competitors have been. And we've offered no higher prices than were necessary to compete in the open market." He also worked on assignment for The American Mercury.

During World War II, Huie was commissioned a Lieutenant and aide to Vice Admiral Ben Moreell of the Seabees. He chronicled their service, and used his experiences as the basis for The Americanization of Emily, published in 1959. He was released from the Navy in 1945 and immediately went to the Pacific as a war correspondent. His time there became the basis for The Revolt of Mamie Stover.

On returning to the United States, Huie resumed working for the American Mercury and was promoted to associate editor and editor. The magazine was purchased in 1950 by Clendenin Ryan, who worked with Huie to establish the journal within the conservative intellectual movement with staff writers like William F. Buckley. Financial difficulties forced Ryan and Huie to sell the magazine to investor Russell Maguire who pushed its editorial tone further to the right.

In the 1950s, Huie went out on lecture tours and appeared on the weekly television program "Longines Chronoscope", interviewing newsmakers, scientists and economists. After 1955 he and Ruth moved back to Hartselle, where she took a job as a schoolteacher while he wrote from home.

As a native Southerner, Huie was called upon by the New York Herald Tribune and Look to report on the events of the Civil Rights Movement in Alabama and Mississippi. He collaborated with Zora Neale Hurston on an assignment from the Pittsburgh Courier to cover the trial of Ruby McCollum, a black woman accused of murdering senator-elect Leroy Adams in Florida in an apparent lovers' quarrel. While in Florida, Huie was arrested for contempt of court, with the judge charging him with "meddling" in a trial that could "embarrass the community". The resulting book was banned in Florida, but the story was covered by Ebony and Time magazines.

He reported heavily on the murder of Chicago teenager Emmitt Till in Mississippi. After the accused murderers were acquitted, he paid them to detail their crime for two feature pieces in Look which served as the basis for his book Wolf Whistle. The later murders of James Chaney, Andrew Goodman and Michael Schwerner provided a similar opportunity, resulting in the book Threee Lives for Mississippi. He also interviewed James Earl Ray for a book, He Slew the Dreamer, about the assassination of Martin Luther King, Jr in Memphis, Tennessee.

Ruth Huie died of cancer in 1973. He met Martha Hunt Robertson of Guntersville two years later and married her on July 16, 1977. They lived for a while in Scottsboro before settling in Guntersville in 1985. He died of a heart attack in November 1986, leaving several incomplete and unpublished manuscripts. He is buried at the Hartselle City Cemetery. His papers were donated to Ohio State University while Martha, now residing in Memphis, Tennessee, manages his literary properties.

In 2006 Hartselle named its public library in Huie's honor and mounted a permanent exhibition on Huie's life and works. The Guntersville Museum and Cultural Center also has a small exhibit on Huie. The University of Alabama has honored him posthumously with a Fine Arts Award as well as induction into its College of Communication and Information Sciences Hall of Fame.