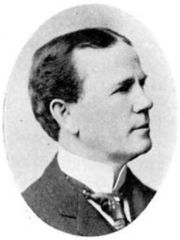 Gunn was the son of Thomas Lacy & Sarah Reynolds Gunn, natives of North Carolina and Virginia, respectively, who were among the early settlers in Tennessee. His father and two older brothers served in the Civil War before returning to their farm. Gunn was raised there and attended a Normal school at Winchester, Tennessee in 1880. He worked alongside his brother, Henry, in a mercantile business at Bell's Landing on the Alabama River in northwestern Monroe County.

Gunn moved to Birmingham in 1884 and took a job as a drug store clerk. He bought out the Ellis Drug Company in 1895 and founded his own successful pharmacy on 2nd Avenue North. Gunn Drug Company was incorporated with partners A. A. Gambill and Thomas Bowron in 1908, but took over sole ownership in 1909. It was reincorporated as "New Gunn Drug Company" in 1915 with J. McG. & C. G. Gunn and John H. Miller as partners. Gunn was also involved in the Palace Livery Company as a partner.

Gunn was elected to the Board of Aldermen in 1901 and chaired the police and sanitary committees during Mel Drennen's second and third administrations. He also served as an officer of the Birmingham Matinee Club and was a member of the Knights of Pythias, Elks, Southern Club and Birmingham Athletic Club.