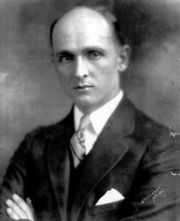 William James Rushton Jr (born July 10, 1900 in Birmingham; died April 28, 1987) was president of the Protective Life Corporation from 1937 to 1967 and a former head of the Birmingham Ordnance District for the U.S. Army.

Rushton was the son of J. Franklin and Willis Roberts Rushton. He joined the US Army in 1917 and served in the infantry during World War I, rising to the rank of Sergeant. He earned his bachelor's degree at Washington and Lee University in Lexington, Virginia in 1921 and went to work for the Birmingham Ice & Cold Storage Co., founded by his grandfather in 1881. By 1932 he had assumed the presidency of that company. Five years later he was made president of Protective Life, in insurance firm founded by former Governor William Jelks.

Rushton joined the U.S. Army Reserve in 1926 and was activated for duty during World War II as an administrator for the Selective Service System. He served on the staff of General Lewis Hershey for two years before returning to Birmingham in 1942 as commander of the Birmingham Ordnance District with the rank of Colonel. In 1944 he was discharged from active service, but remained as civilian chief of the Ordnance District from 1946 to 1961. During his service, Rushton was awarded the "Legion of Merit."

Rushton served on the corporate boards of the First National Bank of Birmingham, Alabama Power Company, Gulf, Mobile & Ohio Railroad, and the Illinois Gulf Central Railroad. He was a director of the Life Insurance Association of America from 1955 to 1961 and of the Health Insurance Association after 1964.

Rushton was also active in civic organizations. He was an honorary life member of the board of directors of the Jefferson County Community Chest and served on the national Citizens Committee of the United Community Campaigns of America. He was also a director of the Birmingham Council of the Boy Scouts of America and the Birmingham Museum of Art, and a trustee of Children's Hospital. He was also an Elder of 1st Presbyterian Church and authored a history of the church in 1952.

Rushton married the former Elizabeth Perry on November 24, 1926 and had two children, William III and James. He was inducted into the Alabama Academy of Honor in 1975.

Rushton died in 1987 and is buried at Elmwood Cemetery.